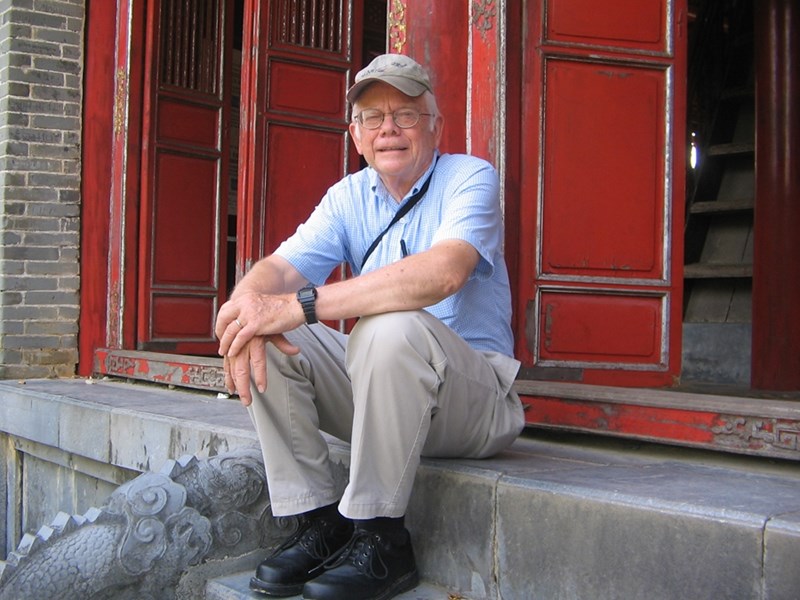 Don Voth at a gate of the ancient Vietnamese Imperial Palace in Hue.

A former University of Arkansas professor's papers are now available for researchers in the University Libraries Special Collections department. The Donald E. Voth Papers contain materials collected and produced by Voth during the course of his teaching and research, both as a student and as a professor. These materials primarily consist of articles, reports, project files, background research and publications related to rural sociology and community and rural development, both locally and internationally.

"Dr. Voth's papers represent not only a commitment to teaching students at the U of A, but also the commitment to having a global impact through hands-on work in rural communities around the globe," said Amy Allen, university archivist.

Voth grew up in Oklahoma, received his bachelor's degree at Goshen College in Goshen, Indiana, and received master's and doctoral degrees in rural sociology at Cornell University, where he also focused on community development, research methods, and Southeast Asian studies. Voth taught at Southern Illinois University before coming to Fayetteville.

Voth served on the Council for Southern Sustainable Agriculture Research and Education program, on the Sustainable Agriculture Network, and as the U of A's representative on the Southern Rural Development Center Advisory Committee. In 1995, he received the Rural Sociological Society's national award for Excellence in Extension and Public Service, first as a member and chairman of the Ouachita National Forest's award-winning Ecosystem Management Advisory Committee, and again as the leader of several major research and action efforts on community-based forest management and planning. He retired as Emeritus Professor in 2003.

Voth has participated in and led several international projects. He lived in southern Vietnam for three years, working with the Mennonite Central Committee, and has also lived and worked in the Philippines. He designed, evaluated and consulted with participatory development projects funded by the United States Agency for International Development in Haiti, Rwanda, Burundi, the Southern African Development Community, Kenya and Egypt.

In the summer of 1996, he led a faculty-student consulting team to Haiti in collaboration with the World Christian Relief Fund. In January of 1998 and for 10 years thereafter, he led annual workcamps to Vietnam, building elementary school buildings in the Mekong Delta and hospital buildings in Nhatrang in cooperation with Vietnam YMCA and Peacework of Blacksburg, Va. In addition to English, Voth speaks French, an ethnic minority language of Vietnam (Ede), Vietnamese, and some German.

Voth has published extensively on Southeast Asia, community development, rural conditions, and forestry. At his retirement, Voth also contributed his entire, extensive collection on Vietnam to the University Libraries, ultimately to be placed on the shelves. The collection includes approximately 100,000 pages of books and journals, many in Vietnamese.

"To me, the library is the soul of the university," Voth said.