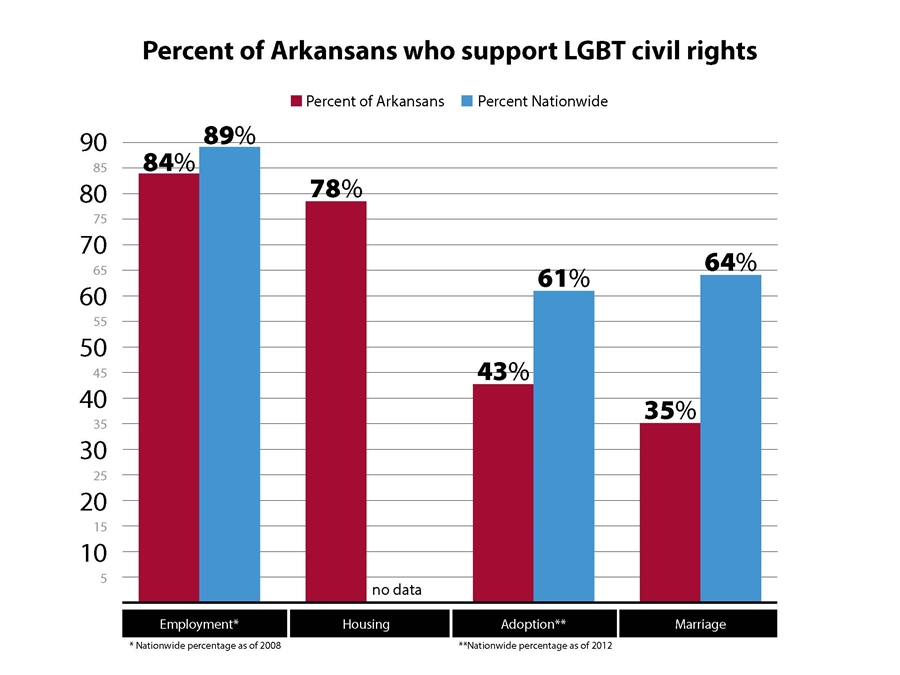 Briana Kordsmeier, public policy graduate student; Geoboo Song, assistant professor of political science, and others offered a battery of questions in this year’s poll about attitudes toward the treatment of gays and lesbians.

Kordsmeier noted that the findings offered a sharp contrast with national public opinion. “Support for housing and employment rights has been overwhelming nationally – at least 85 percent – for at least 10 years,” she said. “Marriage and adoption rights also now have the support of a strong majority of Americans. The average Arkansan is far more reluctant than the average American to support equal treatment for gays and lesbians in family arrangements in particular.”

The poll was designed and analyzed by Janine Parry, professor of political science at the U of A. The poll has a track record over its 19-year history of coming within two points of actual election outcomes. The full 2017 Arkansas Poll Summary Report, protocols and historic outcomes are posted on the web.

The poll is sponsored by the Diane D. Blair Center of Southern Politics and Society, a research center in the J. William Fulbright College of Arts and Sciences of the University of Arkansas. It was conducted statewide between Oct. 12 and Oct. 22 through 801 telephone interviews, including 320 interviews over cell phones.

The economy remains the biggest issue for Arkansas voters, while concern for health care and other issues including crime, politics and education dropped slightly from last year. Respondents also raised a new concern this year: 8 percent mentioned drugs as the most important issue facing Arkansans.

When asked whether they supported the death penalty for murder convictions, 72 percent of respondents indicated that they did. Parry noted that that issue is another one in which Arkansans’ attitudes deviate dramatically from nationwide patterns.

“Nationally, support for the death penalty has been declining since the mid-1990s,” Parry said. “In fact the Pew Research Center now shows that just under half of all Americans support the death penalty.

For the first time, the poll included a question about campaign finance, and found that over half (55 percent) of respondents believe that the system of funding political campaigns in the U.S. should be “completely rebuilt.” A 2015 New York Times/CBS poll found comparable nationwide enthusiasm for a total overhaul.

As in past years, the poll showed that partisanship in Arkansas remained steady, with 32 percent of likely voters identifying as Republican, 25 percent as Democrat and 35 percent as Independent. Nationwide, the overall breakdown is 24 percent Republican, 31 percent Democrats and 42 percent Independent, according to Gallup.

Parry noted that Arkansas Independents exhibited a modest shift this year: 26 percent of Independents said they lean closer to Democrats, up from 19 percent in 2016. This uptick was matched by a drop among those who said they were “closer to Republicans.”

“I’m unconvinced either party should get too worked up about this,” said Parry, “But it does mark a reversal from the dramatic move to the right we’ve seen among Arkansas independents since 2010, a move that has flipped election outcomes upside down. So, it’s something to watch as we approach the next big round of state elections in 2018.”

The poll also included questions about climate change, abortion and gun control. For more information, see the Summary Report, protocols and past results.