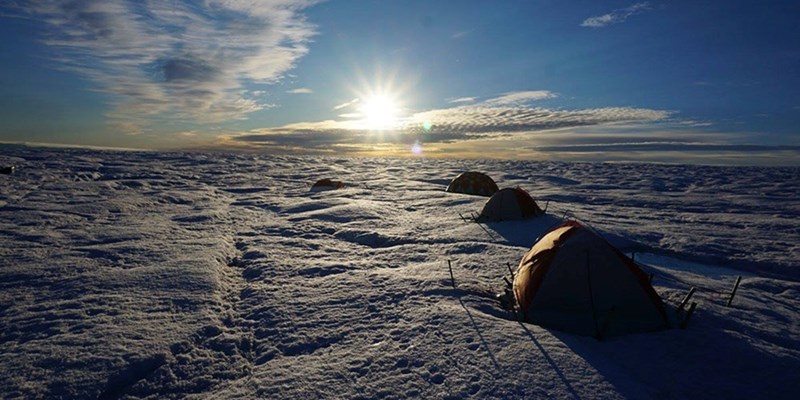 A snowstorm that hit during their first night on the ice pinned the researchers down for a week.

After a flight aboard an Air National Guard C-130 from Albany, New York to Kangerlussuaq, a week on the ground preparing thousands of pounds of gear and three helicopter flights to shuttle it to a base camp on the Greenland ice sheet, it was finally time for Matt Covington, assistant professor in the Department of Geosciences in the J. William Fulbright College of Arts and Sciences, and his colleagues to get to work. They'd come to collect data from deep within moulins, the sinkholes in the ice that extend all the way to the bedrock, 2,000 feet or more deep.

Then a storm hit the first night in the tents, dumping enough snow to obscure the landscape. It's dangerous to walk on the Greenland ice sheet if you can't see where you're stepping — crevasses in the ice could swallow a hiker — so the crew was pinned down, waiting for the snow to melt and watching the summer research season slip away.

"Finally, after a week of waiting, enough snow had melted, and enough stir craziness accumulated, that we decided to conduct a first recon to attempt to locate the newly formed moulin that we had identified from the helicopter," Covington wrote in a blog post about the trip.

Not that the weather had become balmy; a typical summer day on the ice sheet means temperatures near freezing and winds howling at 20 to 40 miles per hour.

Covington, along with research assistant Adam Barnes from the University of Arkansas Center for Advanced Spatial Technology and graduate student Celia Trunz, was in the first year of three-year, $691,000 National Science Foundation-funded study, in collaboration with Jason Gulley from the University of South Florida, to investigate the relationship between meltwater and glacial movement. They want to know if water pouring down moulins speeds up the ice sheet's march to the sea. If enough water accumulates at the bottom of a glacier, the resulting pressure could facilitate ice movement the way a melting ice cube slides along a hard surface. On the other hand, if the meltwater is quickly channeled to the ocean it may not be a factor in ice motion.

Read the full story of their study and their trip on Research Frontiers.