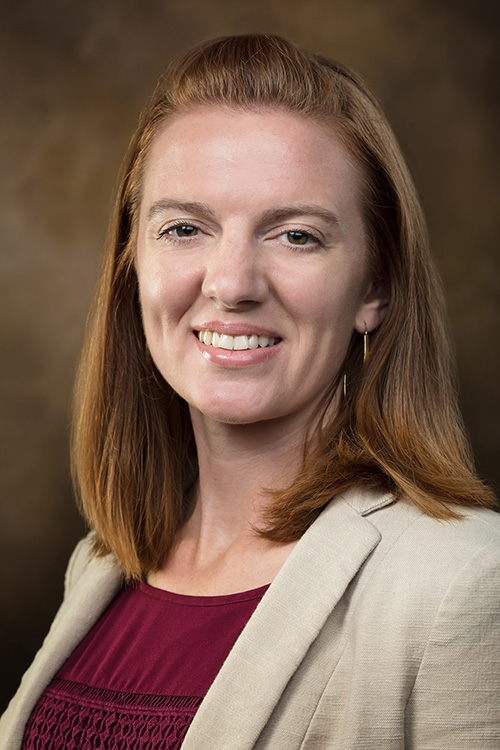 FAYETTEVILLE, Ark. – Kate Shoulders, associate professor of agricultural education at the University of Arkansas, is featured in the first list of “Teaching Innovators” in The Chronicle of Higher Education’s October Innovators Supplement.

Shoulders is one of 10 professors highlighted in the Chronicle’s supplement. She is a faculty member in the Dale Bumpers College of Agricultural, Food and Life Science’s Department of Agricultural Education, Communications and Technology.

The profile of Shoulders, “Showing Students How an Expert’s Opinion Unfolds” by Dan Berrett, focuses on her feedback to students in the graduate-level Research Methods in Social Sciences class.

“I was totally stunned,” Shoulders said of being contacted by the Chronicle. “So many instructors are innovators. I’m very fortunate to have a team of active supporters within the University of Arkansas who think of me when opportunities like this cross their desk. While this is likely the only 15 minutes of fame I’ll have during my career, I’m more excited that it brings the U of A and the agricultural education profession into a spotlight that educators across the nation notice.”

The article focuses on Shoulder’s decision, three years ago, to record herself on video as she reviewed each student’s work. She found that in addition to saving time she was enabling students to watch her thought process at work as she expressed first impressions of their work.

Students “see that researchers don’t go ‘poof,’ and have the final answer,” said Shoulders in the story. “It’s a thought process. Even experienced researchers weigh their options.”

The article details the process of evaluating one of the nine research projects for her class. It also illustrates several of the U of A’s guiding priorities, including promoting innovation in teaching and learning, strengthening graduate education and advancing student success.

Her video reviews serve 35 to 50 students each class, most who attend in person but many who are enrolled online. The videos capture her initial reactions, which Berrett described: “Sometimes this approach means that she sorts out her thinking on camera. She’ll offer praise and encouragement where appropriate (‘Perfect!’), constructive comments (‘I’m excited to see how that’s going to come out in your purpose and objectives’) or what she’s still puzzling through (‘I think that’s where you’re going; I could be wrong’).”

“Students love the video critiques,” said Shoulders. “They can watch my nonverbals as I think about their projects and understand my full thought process as I consider ideas they put in their projects. The students view it almost like a one-on-one meeting with me, but without the hassle of scheduling. Through the videos, we build a productive student-teacher relationship through their projects.”

The article also includes comments from a course evaluation by Hailey Gates, a master’s degree student in agricultural and extension education.

Shoulders told Berrett if teachers are telling students to “see me” or “this needs work” a lot, video feedback could be helpful to the teacher. “I don’t want to use an innovation because it’s innovative, but because it’s helpful,” she is quoted as telling the reporter.

This past summer the Chronicle sent out a call for nominations from readers via social media, from college teaching advocates and from higher education leaders representing different fields and diverse institutions. Chronicle editors and reporters culled the list down to the final 10 faculty members.

Video critiques aren’t Shoulders’ only innovative idea. She also has students submit visual reflections instead of written reflections to express their feelings for the week.

“My class requires a lot of work and students get stressed,” said Shoulders. “Instead of writing their reflections, which tends to be a lot of what they think I want to hear and not how they actually feel, they find images that describe how they feel.”

Students search for a keyword, evaluate images, then adjust keywords to find more accurate images than their original search.

“Oftentimes they end up with more manageable feelings, such as ‘anxious, but excited’ rather than ‘panic,’” said Shoulders. “They are also able to display their sense of humor, which allows me to build pretty strong relationships with online students. Lastly, it allows me to check in with every single student, every week, so no one falls through the cracks. When someone submits an image that suggests they need additional help, I can identify it and take action right away.”

Shoulders received the Innovative Teaching Award from the Association of Public Land-Grant Universities in 2015; collaborative awards for Distinguished Manuscript from the Journal of Agricultural Education, and Outstanding Innovative Idea and Outstanding Research poster presentations at the American Association for Agricultural Education conference in 2016; and has been honored with the U of A Alumni Association’s Rising Teacher Award and the national Education Award by the North American Colleges and Teachers of Agriculture, both in 2017. She also won this year’s U of A Life Raft Debate, a campuswide competition for professors, with the winner determined by students.