U of A Professor Leads Group Recommending Individualized Approach to Hydration 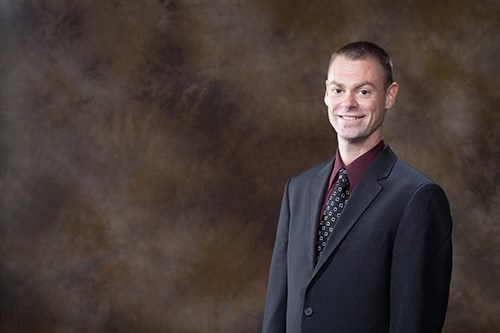 University of Arkansas associate professor Brendon McDermott chaired a group of researchers and clinicians tasked with writing new recommendations on hydration in physically active people that emphasize there is no one-size-fits-all.

A position statement released by the National Athletic Trainers' Association says scientific evidence shows recommendations must be made on an individual basis, taking into account many factors. The authors of the statement, which was published in the association's September Journal of Athletic Training, cited 255 scientific research studies in the statement.

McDermott teaches and conducts research in the athletic training master's degree program in the College of Education and Health Professions and is a certified athletic trainer and Fellow of the American College of Sports Medicine.

The National Athletic Trainers' Association statement replaces one issued in 2000 on fluid replacement for athletes. It addresses the needs of both elite athletes and recreational exercisers. The statement contains 31 recommendations for athletic trainers that the authors categorized by strength of evidence base.

Extreme deviations on either end of the physiological range of hydration - whether a person is dehydrated or overhydrated - can compromise health and organ function.

"These guidelines are based on the most rigorous scientific evidence to help health-care professionals and physically active individuals prevent exertional hyponatremia and dehydration,” McDermott said. Hyponatremia is a potentially fatal condition caused by drinking too much fluid, which lowers sodium in the blood to an abnormally low level.

The statement addresses laboratory-based methods available to assess hydration, but it also describes several easier methods that are effective for both competitive athletes and weekend participants. These include weighing themselves before and after exercise, assessing their thirst and observing the color of their urine, which darkens when a person is dehydrated.

"From day to day, or throughout a day, these all reflect relative hydration status and can provide individuals important feedback on their personal hydration status," McDermott said.

During exercise, people should drink only as much fluid as they lose through sweat, and they should not gain weight during exercise unless they started with an unavoidable fluid deficit.

The statement contains specific instructions for athletic trainers and other health-care professionals on taking accurate hydration measurements and treating resulting conditions. It also gives a simple formula for determining sweat rate. Subtract body mass, or weight, after exercise from body mass before exercise, add the volume of fluid consumed during exercise and subtract the volume of urine, if any. Sweat rate for adults can range from half a liter to 4 liters per hour.