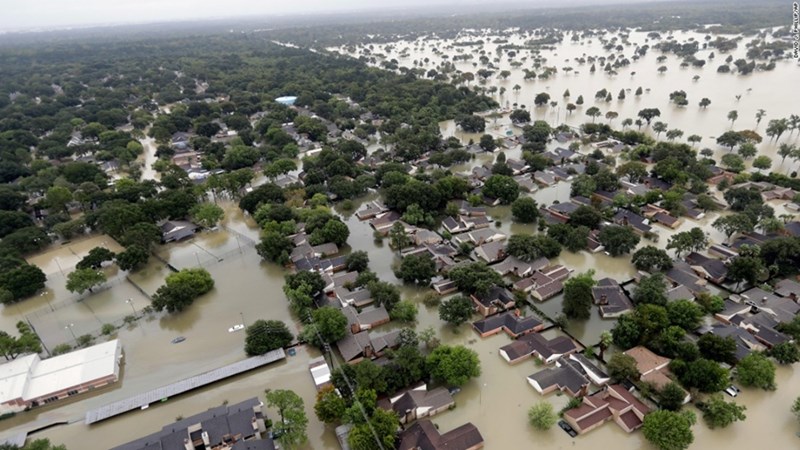 An interdisciplinary team of researchers from the University of Arkansas' J. William Fulbright College of Arts and Sciences — principal investigator Kevin Fitzpatrick of the Department of Sociology and Criminal Justice, Xuan Shi of the Department of Geosciences, and Matthew Spialek of the Department of Communication — has been awarded a National Science Foundation grant of $124,527 for the project titled, "RAPID: Social Capital, Coping, and the Displaced: Health, Well‐Being, and Resiliency Among Hurricane Harvey Victims."

Hurricane Harvey made landfall on Aug. 26 as the first major hurricane to affect the United States since 2005. The damage caused by Harvey was intense, causing flooding of catastrophic proportions and prompting the displacement of over 50,000 people. It is estimated that Hurricane Harvey is likely to become the second-most costly natural disaster in U.S. history.

In this context, "stabilizing the shock to local and regional systems of social capital represents a significant challenge and requires immediate scientific investigation of different aspects of citizen well-being, including the nature and extent of social ties/resources, anxiety, depression, adaptation and resiliency, in order to address a host of social, economic, psychological, housing, and health-related challenges," said Fitzpatrick, director of the university's Community and Family Institute.

This project will investigate the role of social ties and resources in helping citizens recover from Hurricane Harvey.

Social ties and resources in neighborhoods, at work, through religious organizations, and through other social groups are vital for helping individuals and families navigate their daily lives. But when disaster strikes, these resources can be severely disrupted.

For example, is the loss of social resources more acute for lower-income people compared with upper-income people, or for racial minorities compared to non-minorities? The research will also examine whether social resources in neighborhoods, for example, have suffered more damage than those involving groups that cross different geographic locations, such as churches and workgroups. To address these and other issues, the team, which includes sociology graduate students, and the interviewers specifically trained for this project will conduct interviews with approximately 300 displaced persons.

Fitzpatrick said he and his colleagues hope that the findings will be used to "inform communities as to how they might better prepare for such disasters and their aftermath by clarifying the role that various forms of social capital play in the assimilation of persons into new communities."

Anna Zajicek, chair of the Department of Sociology and Criminal Justice, emphasized the team's interdisciplinary focus, "which is critical to creating robust research projects with impacts that are likely to extend well beyond what can result from studies conducted within a particular discipline."

Indeed, she said, the broader impact of this research will be a better understanding of the effects of natural disasters on the fabric of affected communities and families, including how the same fabric of connections may aid in ameliorating catastrophic social, psychological and economic damages.

Find out more about the National Science Foundation grant.

About the Department: The Department of Sociology and Criminal Justice offers three degree programs and two honor societies and affiliation with three research units: the Community and Family Institute, the Terrorism Research Center, and the Center for Social Research.