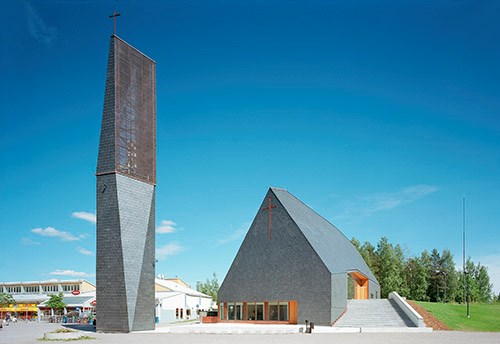 The Kuokkala Church, which won first place in an invited design competition.

​FAYETTEVILLE, Ark. – Anssi Lassila will present a lecture at 4:30 p.m. Monday, Sept. 11, in Ken and Linda Sue Shollmier Hall, Room 250 of Vol Walker Hall, on the University of Arkansas campus in Fayetteville, as part of the Fay Jones School of Architecture and Design lecture series.

Lassila is the founder and director of OOPEAA (Office for Peripheral Architecture), with locations in Seinäjoki and Helsinki, Finland.

For Lassila, the process of creating architecture is always about a dialogue between the small and the large, about interaction between different forces at different levels of scale. His work is characterized by a strong interest in the way in which different materials naturally behave. A desire to find solutions that take advantage of the natural qualities of the material chosen while also optimizing the process of building and construction has informed his work from the earliest projects on. His international breakthrough was the Kärsämäki Shingle Church in 2004.

In his lecture, titled "Scale, Light and Material," Lassila will present several works by his office, from his first project, the Kärsämäki Shingle Church, to some of the most recent ones, as a way of demonstrating how the aspects of scale, material and light serve as key elements of architecture in his work.

His interest in learning from the past — and in applying the knowledge from history to the contemporary situation in a way that makes the best use of possibilities offered by current technologies — has led OOPEAA to a research and development oriented approach, which has manifested itself in various ways over time. One example is the development of a modular system of prefabricated volumetric elements of cross-laminated timber in conjunction with the Puukuokka Housing Complex, the first eight-story wooden apartment building in Finland.

Lassila's architecture displays his interest in combining a sculptural form with traditional materials and innovative techniques. For him, peripheral sensitivity is a vital part of the creative process. OOPEAA draws inspiration from "in-between" states — between urban and rural, traditional and contemporary, local and international.

In its approach, OOPEAA emphasizes the potential embedded in exploring new methods and techniques as a means of developing new solutions in building. Their work is characterized by a strong interest in the way materials behave and experimentation with innovative solutions. It is about venturing into borderlands and identifying new possibilities where tradition meets the new.

OOPEAA works on a wide range of projects on varying scales, including churches and daycare centers, an art museum, office buildings, housing, private houses, town planning, renovations and extensions, and historically valuable landmarks. The office currently employs a staff of 10.

The firm has been honored with significant awards and won several prizes in competitions both in Finland and abroad, including the Finlandia Prize for Architecture in 2015, the Wood Architecture Award in 2015, the Canadian Wood Design and Building Award in 2016 and the American Architecture Prize in 2016 in two categories. The work of the office also has been selected for the shortlist for the European Union Prize for Contemporary Architecture-Mies van der Rohe Award in 2005, 2011 and 2017.

This is the Miller Boskus Lack Architects Lecture in Wood Design and Construction and the 2017 Dean's Lecture in Nordic Architecture, in promotion of the Fulbright U.S. Scholar Program.

The school is pursuing continuing education credits for this lecture through the American Institute of Architects.