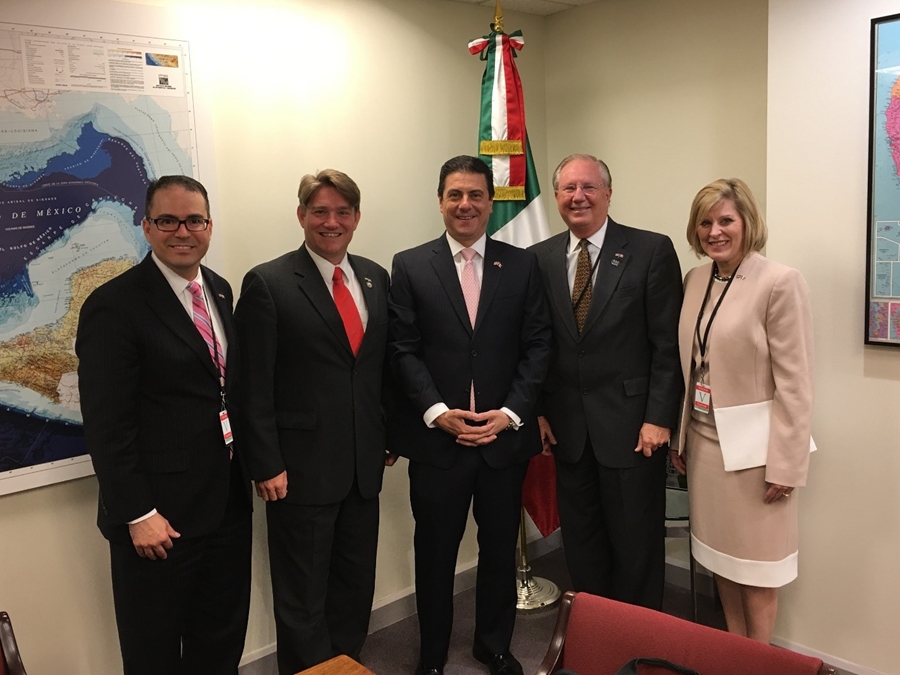 ROGERS, Ark. – The World Trade Center Arkansas has played an active role in the past three months representing the state and its businesses during the ongoing process of modernizing the North American Free Trade Agreement.

Melvin Torres, director of Western hemisphere trade for the World Trade Center Arkansas, traveled to Washington, D.C., from May 15-18 with several Arkansas leaders who were present for trade advocacy and support. These included Arkansas Secretary of State Mark Martin and Angela Marshall-Hofmann, member of the World Trade Center Arkansas Board of Advisors, who also served as former trade counsel for the U.S. Senate Finance Committee and has extensive experience in negotiation and congressional passage of trade agreements.

The delegation met with multiple high-level government officials including the International Trade Administration, the U.S. Department of Commerce and members of the Office of the U.S. Trade Representative, among others.

“NAFTA has been extremely beneficial to Arkansas,” Torres said. “We are in a unique position compared to other states of the nation as we export twice as much as we import with both partners. “The trade agreement has enabled Canada and Mexico to become our largest trading partners. It currently supports nearly 110,000 Arkansas jobs.” The USTR reports that U.S. jobs supported by goods exports pay up to 18 percent more than the national average.

This unique position Torres refers to is the fact that Arkansas is one the few states in the United States that has a positive trade balance with both Canada and Mexico.

“In fact, Arkansas exports hundreds of millions of dollars more in goods and services to Canada and Mexico than we import from them,” Torres said. “We have seen an incredible 700 percent increase in our exports to Mexico since NAFTA began. Furthermore, exports from Arkansas to Mexico are growing 3.6 times faster than exports to any other country. Our state’s success can be a model for the rest of the country.”

After the group from Arkansas presented this information to the USTR, the World Trade Center Arkansas was referred to as the success example of Middle America during the policy discussions.

Later, the group met with the Ambassador of Mexico, Geronimo Gutierrez, and the Embassy of Canada’s Deputy Chief of Mission.

“We have a unique opportunity to participate in the NAFTA modernization process,” Marshall-Hofmann said. “We can ensure continued cross-border access for U.S. goods and services as well as seek new terms that reduce cost, speed up delivery and simplify the way we do business with our most important trading partners.”

After compiling this data from the survey, the USTR invited the World Trade Center Arkansas back to Washington to testify on June 27 in the public hearing on federal government efforts to modernize NAFTA. Marshall-Hoffman and Torres crafted a testimony that simultaneously expressed the needs of Arkansas companies while emphasizing that Arkansas is a NAFTA success story for Middle America.

“The Secretary of State did a fantastic job at being right on message and delivering Arkansas' unique position with NAFTA,” Torres said. “On the other hand, without Angela, the Washington, D.C. trade mission, the submitted comments and the opportunity to testify would have never been possible. Not only she was instrumental but she was the one who facilitated everything.”

Torres returned to Washington, D.C., on June 27 to testify on NAFTA, where he presented the needs of Arkansas companies and explained how NAFTA has largely benefited the state’s economy.

“We welcome the modernization process and know Arkansas companies will benefit even more from the updated agreement,” Torres said. “I see great benefit in the services areas like insurance, communications, IT and e-commerce — all growing industries in Arkansas but not properly included in the trilateral agreement.”

“We like to be first on trade and promote economic development,” he said. “So everyone from the governor, our congressional delegation, state legislature, along with companies headed by the best experts like Marshall-Hofmann, work as a team with our organization to achieve this level of prosperity.”