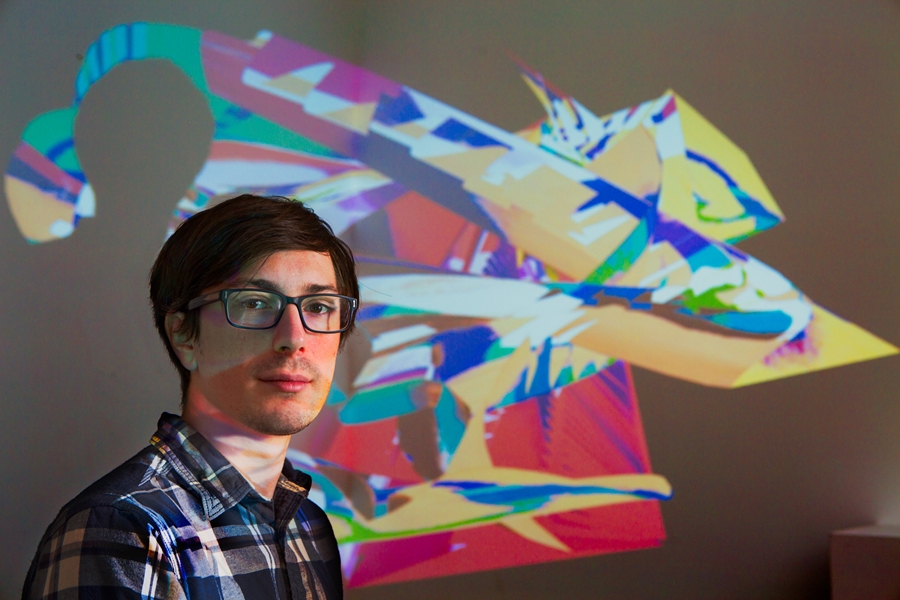 In his own words, "a weird leap of faith" catapulted Wanbli Gamache into the Bachelor of Fine Arts program in the Department of Art at the U of A.

That leap has paid off, as Gamache is making a name for himself in the growing world of time-based art. He has showcased his work in new media art festivals in Athens, London, Ecuador, Colombia and Spain, as well as in Miami, Chicago, South Carolina and Little Rock.

Clemson University hosted Gamache as a visiting artist in February.

The 27-year-old, who earned a bachelor's degree in Anthropology from the J. William Fulbright College of Arts and Sciences in 2012, returned to the university in 2014 to pursue a passion for visual art.

"I grew up drawing, but I lost touch with it for a big portion of my life. I found it again after graduation from Anthropology, when I started doing illustrations for bands - posters, album art, T-shirt design. I really fell in love with art again."

The art form Wanbli excels in goes by several names, including transmedia, new media, new genres and time-based art - a reference to the passage of time as a fourth dimension. Gamache describes himself as an interdisciplinary multimedia artist.

Video art and sound art are at the forefront of the contemporary art scene, said John C. Kelley, a U of A alumnus and former instructor who designed the time and motion course that introduced Gamache to the medium.

Kelley now teaches time-based art at the University of Tennessee in Knoxville.

He said that three of four finalists for the prestigious Turner Prize in 2014, the year he proposed the time and motion course, worked in new genres. The Hugo Boss Award and Edvard Munch Award also have gone to new media artists in recent years. Additionally, a retrospective at the Tate in London includes a digital component.

The Fulbright College Department of Art plans to add a tenure track video/digital art professor to the faculty next fall, said Sam King, clinical assistant professor and vice-chair of the department, and coordinator of the Foundations program for first-year students.

Gamache and other students have built on what they learned in Kelley's beginning and intermediate classes, advancing their knowledge of time-based art in university art studios and community venues such as Backspace and Lalaland.

"We're very fortunate that Wanbli and his peers forge ahead [with their explorations of this art form]," King said. "They show how exciting the possibilities are, and how vital it is that we as a school facilitate pursuits into new media."

"As the school of art grows, so will our offerings in video and other new media," he said. "Wanbli is a student who represents the very real demand for coursework in that area. It's where he thrives."

"I try to find as many different ways as possible to tackle each video, talk about what I want to talk about, whether it's using digital software or more of an analog approach," he said. A music minor in his earlier degree program, Gamache also creates his own soundtracks.

Major themes for him are memory, identity and the dynamics of space.

"I'm interested in liminal spaces, whether in physical or digital environments, and how those environments affect our identity - and how our identity is reformed because of that space," he said.

A recent piece, "Error in Flux," cycles between a collection of ordinary household objects painted the same shade of blue and a shifting collage of shape and color. Gamache used digital chromakey effects to erase physical objects and project new colors and objects into the contours left behind. He then used fluorescent lights and glitch effects to erase the digital representations, creating a never-ending movement of new forms and space.

"How do I erase identity - through a physical or a digital way - and how in different ways can I restructure that identity, whether in an object, a person or a place?" he asked.

Gamache grew up immersed in the world of digital technology, playing video games and surfing the web. Exploring the relationship between the virtual world and the physical world he inhabits is a prime driver for his work.

"We're in an exponential rate of new technologies and new ways that we perceive our reality though those technologies," he said. "I think it's important to think about that speed, and how that speed of change affects us as people."

"More and more, we're starting to fuse our own lives with technology, whether it's enhancements or genetic code or prosthetics or how fast we can process information. Virtual realities are a way to teach and learn, explore who we are as people," he said.

"How do I perceive the real world in front of me, perceive the spaces that I live in, in connection with all the time I'm spending in a digital environment?"

Gamache's latest focus is on installation art - large-scale projects that incorporate sound, video and sculpture. The artist is intrigued by the relationship between viewer and art, exploiting electronics and robotics technology to create an interactive experience.

"The hybrid approach - working in any designated medium - is what Wanbli does best," said Bethany Springer, associate professor and head of the university's sculpture program. "In his installation art, you're getting this experience of the projected image, time-based media and three-dimensional components, all at the same time."

Gamache represents the type of student that the faculty hoped to produce by restructuring the foundations curriculum two years ago, Springer said. Rather than focusing on discrete art forms such as painting and ceramics, the curriculum emphasizes an interdisciplinary approach.

Gamache is committed to his work, laboring for long hours and begging for additional critique, she said. Kelley, the U of A alumnus who originated the time and motion course, recalled Gamache dropping the hard drive that held all his artwork files. He had not made a backup.

Shock and panic crossed his face, and then Gamache got busy, fetching a screwdriver and manually repairing the shattered hard drive.

"It's hard to stop him," Kelley said. "The longer you work at something, the better you get, and Wanbli puts in a lot of hours."

Gamache is heading to the School of Art Institute of Chicago this fall, where he will pursue an MFA in Film, Video, New Media and Animation.

"We're going to be sad to see him go, but he is so ready for it," Springer said. "Wanbli is going to go far. Just wait."