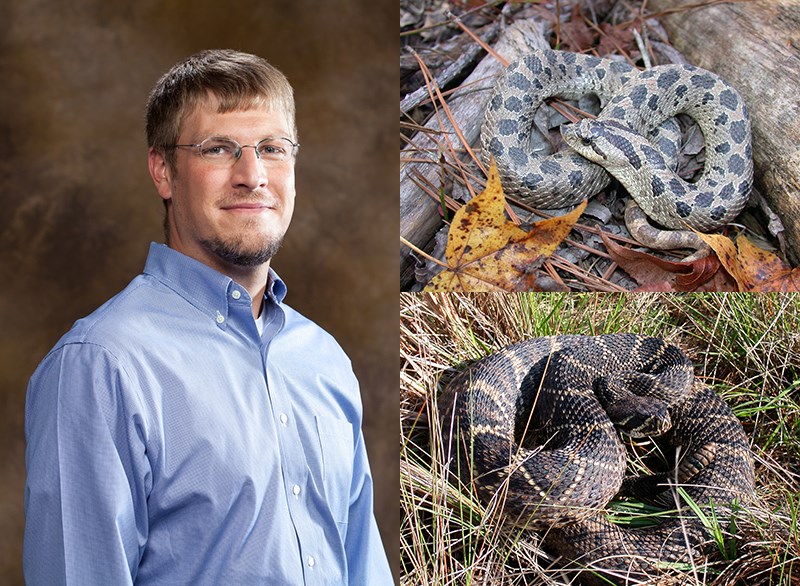 FAYETTEVILLE, Ark. – How can researchers determine the number of snakes in an area when the snakes don’t want to be found? That’s the central question behind a University of Arkansas biologist’s three-year, $465,098 study to test a new method for estimating population densities of two species of rare snakes.

J.D. Willson, an assistant professor in the Department of Biological Sciences, will validate his new method, Innovative Density Estimation Approach for Secretive Snakes (IDEASS), by estimating the number of southern hognose snakes and eastern diamondback rattlesnakes at Fort Stewart, Georgia, one of the Army’s most active training installations. The Department of Defense (DoD) funded the study through their SERDP-ESTCP program, which funds environmental research on military bases. The research is a collaboration with researchers at the U.S. Army Corps of Engineers’ Construction and Engineering Research Laboratory at the University of Illinois, Urbana-Champaign.

“The DoD is one of the biggest landholders in the country and owns much of the best remaining habitat for these rare species in the Southeast,” Willson said. “In fact, they have the highest number of rare and endangered species per acre of any landholder in the country and they are responsible for managing their populations. They know they have these snake species, but they don’t know if they are really rare or just hard to find.”

IDEASS is a model that combines radio telemetry data from tagged snakes with observations on road-crossing behavior and road surveys to determine snake population densities. Willson and his team of researchers will capture and radio tag snakes to determine their movement patterns, then drive along roads within Fort Stewart to see how many snakes they find crossing the road and how long it takes them to cross. By combining vehicle speed, snake-crossing speed, and models of snake movement, they can determine the probability of detecting a snake during a road survey and relate that to density of snakes in the surrounding landscape.

Traditionally, the way to determine a species’ population density is a method called capture-mark-recapture. But that approach is ineffective with many snakes, Willson said. “You almost never recapture them. They are so secretive that approach doesn’t work.”

IDEASS, by contrast, allows researchers to estimate densities without recapturing individuals, and can take advantage of the fact that road surveys are the most reliable method for finding these rare and elusive snakes. That information is vital to DoD resource managers who need to quantify densities of threatened or endangered snake species.

Willson developed IDEASS while researching invasive Burmese pythons in Everglades National Park. Despite their massive size (sometimes over 17 feet long), Burmese pythons are notoriously hard to find and cannot be studied effectively by capture-mark-recapture. They are well camouflaged and adept at hiding. The best way to find the pythons, Willson discovered, was to drive on park roads and spot them when they crossed. He also used IDEASS to generate the first population density estimate of rare southern hognose snakes in the Sandhills region of North Carolina.