Robert and Karen Smith Back the Bands With $100,000 Campaign Commitment 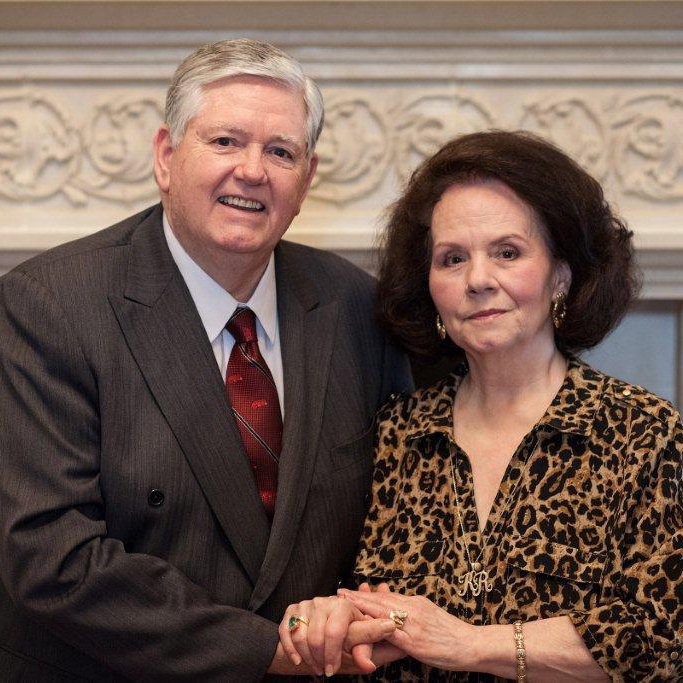 FAYETTEVILLE, Ark. – University of Arkansas alumnus Robert Smith says the decision to give is easy and every amount helps. He and his wife, Karen, are contributing two $50,000 gifts to support the University Bands in the J. William Fulbright College of Arts and Sciences – one for the Robert and Karen Smith Recruiting and Outreach Fund for University Bands and the other for the bands’ areas of greatest need. Both gifts will count toward the university’s capital campaign, Campaign Arkansas.

“We are so grateful to Robert and Karen for their generous gift,” said Todd Shields, dean of Fulbright College. “Because of their commitment to our bands, students will find their musical passion, connect to a nurturing band community, be able to excel during their time at the University of Arkansas and strive to become successful alumni like the Smiths.”

Robert Smith was born in south Arkansas but moved to Little Rock with his parents and lived there for a short time. The Smiths lived 10 blocks south of War Memorial Stadium, which ensured their attendance at every Razorback football game – an outing that Smith’s parents rarely missed even before they moved to the state’s capital. This experience would set the stage for a lifetime of appreciation for the University of Arkansas.

“Moving to Texas strengthened my ties to Arkansas,” he said. “There was never a question in my mind about where I wanted to go.”

As a freshman at the U of A, Smith knew no one, so he joined the band as a tenor sax player. From there, the band became an important part of his life and college experience. Smith graduated from the university in 1972 with a Bachelor of Arts in economics from the Fulbright College. Since then, he has spent 32 years in financial services and is the senior vice president of investments for Benjamin F. Edwards and Company in Paris, Texas.

“Everything about the university to me was the band,” Smith said, noting that Director of Bands Richard A. “Doc” Worthington and Eldon Janzen had tremendous impacts on his life. “It was a huge part of who I was as a student. Band was my second home, and it gives students an opportunity to belong to something.”

The most recent gifts from the Smiths are in addition to a scholarship already established by the couple – the Robert M. Smith Endowed Band Scholarship. Robert Smith has advice for these recipients, as well as other students currently involved in the band: “The most important time in your life is right now, and in 20 years from now, you’ll realize how important the band was to you.”

Smith’s wife, Karen, who graduated from North Little Rock High School and attended the University of Central Arkansas, shares his appreciation for the Razorback Bands.

“None of this is possible without Karen,” Smith said.

Robert Smith is member of the University Bands Campaign Arkansas committee and a life member of the Arkansas Alumni Association. He and Karen are members of the Chancellor’s Society and are recognized as ThoroughReds for 12 years of consecutive giving to the university. They are also included in the Towers of Old Main, the giving society for the university’s most generous benefactors.