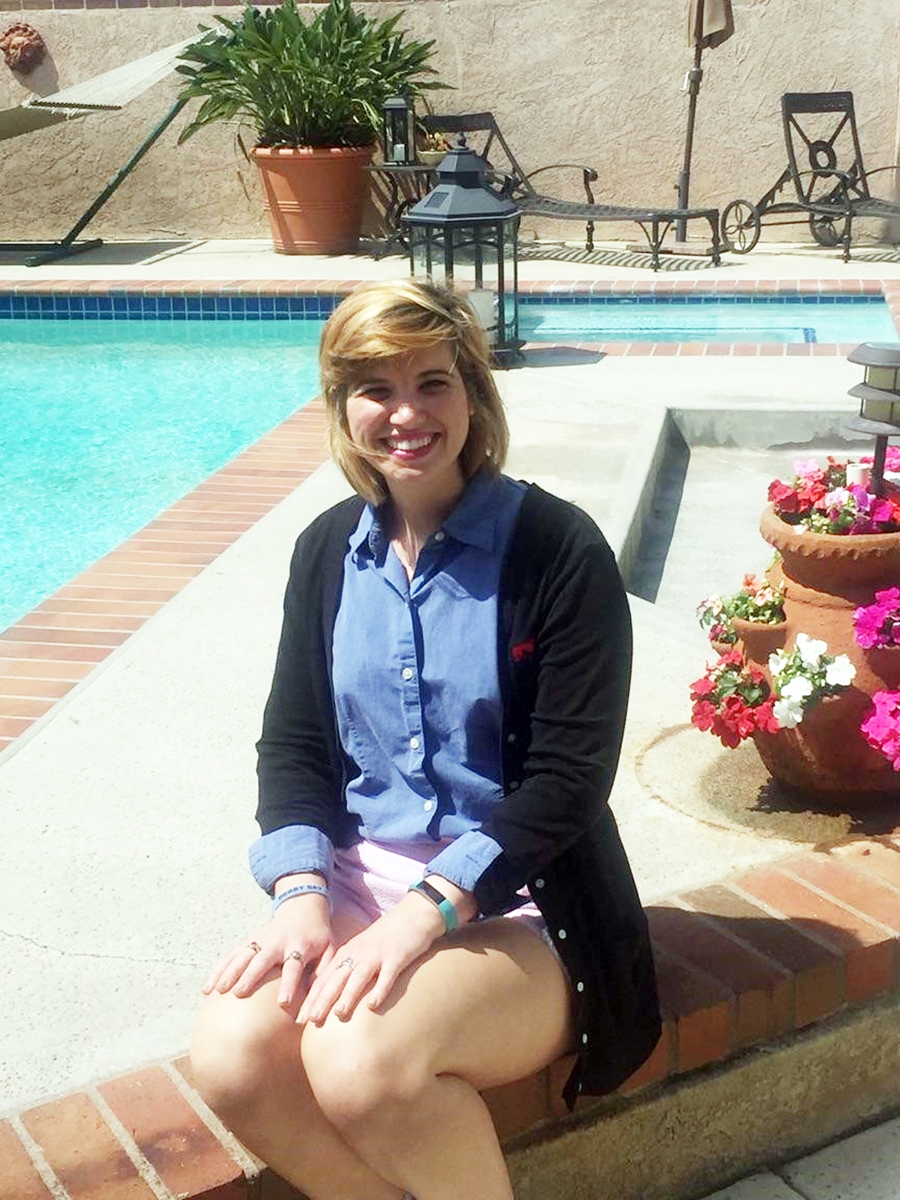 2017 spring graduate Madie Scott completed her entomology minor this semester the way most people want to see insects - from a distance.

FAYETTEVILLE, Ark. – Madie Scott, a U of A spring graduate, combined an interest in two very distinct areas to develop skills qualifying her for unique and challenging career opportunities.

Scott, a graduating senior from Katy, Texas, earned her bachelor's degree in social work with an unplanned minor in entomology. In cases where other social workers may be put off by the presence of insects, she has the essential skills to evaluate and address the situation.

Scott's journey began during her sophomore year in high school. The calling to be a social worker led her to the University of Arkansas. Once in Fayetteville, she faced hardships.

"I struggled finding friend groups. I struggled finding a place where I could belong. I was far away from my family and everything I knew. I wanted to transfer every day, but entomology changed my life," said Scott. "I took that one class my last semester of sophomore year. I saw myself as the insects. I felt like another fly on the wall, but I also knew I was a very smart, talented woman who has been given strengths to really impact the world. I knew I could change the world just like how bees are pest and scary but pollinate all the flowers, or like how wasps are taking their unique ovipositors and being mimicked in brain surgery."

The Department of Entomology in the Dale Bumpers College of Agricultural, Food and Life Sciences quickly grew on Scott and became her home away from home. A self-described girly girl who likes pink and being a diva, she went through an adjustment period, but was quickly accepted.

Robert Wiedenmann, a professor in entomology, was Scott's adviser for her minor.

"Every challenge in every entomology class she faced head-on and prevailed," said Wiedenmann. "Her interest and drive outweighed the deficiency she had in biology."

Scott's drive has carried her throughout her college career. She was determined to earn her minor in entomology, even going to the extent of delaying her graduation by a semester to finish her degree plan. She recently completed coursework for her minor the way most people want to see insects — from a distance. Personal reasons forced her off campus for the spring semester, but she and Wiedenmann created a plan allowing her to finish classes through distance education while living in Houston, Texas.

"I had some health issues that really took a toll on my body, so it's been nice to be with my family and see a nutritionist and get better," said Scott. "There were also some family issues and I needed to be home."

She completed her 15 hours in entomology this semester, returning to campus as needed for insect collections and to work on identification skills.

Scott's perspective on life led her to the realization that humans and insects have a lot in common.

"How often do we as humans go around thinking we are a pest?" asked Scott. "We feel society is trying to swat us away like flies or stomp us down as though we are disgusting cockroaches. We feel as though we are treated like we are insignificant, and our ideas, personality and character do not mean anything."

"This process (molting) represents the hopeful outcome of therapy where the client allows change to occur, and their environment has transformed into a healthier living situation," said Scott. "As the process gets more in depth in how insects molt, there are too many connections for me to share, but their comparison to the therapy process, that is what makes sense to me. It is like I need to understand insects to understand people."

Scott has a passion for empowering people, and a passion for insects. Her ideas on the therapy process will allow her to approach it in a different mindset. Following graduation, she plans on working in the community and finding a way to integrate insects into her style of empowering others and the community as a whole. She wants to allow people to see their potential and worth.

"She will be uniquely qualified in the field of social work, and will be prepared for working with those clients who may be living in conditions that include insects," said Wiedenmann. "Rather than be terrified or be put off because of the presence of insects such as cockroaches, she will understand the situation a bit better."

Not only has Scott found a way to become uniquely qualified in the field of social work, she has also started to open the eyes of those in the entomology world to the world of social work, and the validity of the two being able to work together.

"I have told many colleagues about Madie, and her combining social work with an entomology minor," said Wiedenmann. "The first response is usually, 'Really?'  Then as they think a little more, their replies change to something like, 'Sure.  That makes sense. I can see how that could work out for her.'"

Scott found entomology, and perhaps went through her own holometaboly.

"I left my comfort zone and made an impact somewhere else, all because of entomology, and the staff and students I studied with," said Scott. "Everyone I met was so nice, so supportive and are people I consider as friends and will never forget. They inspire me every day."