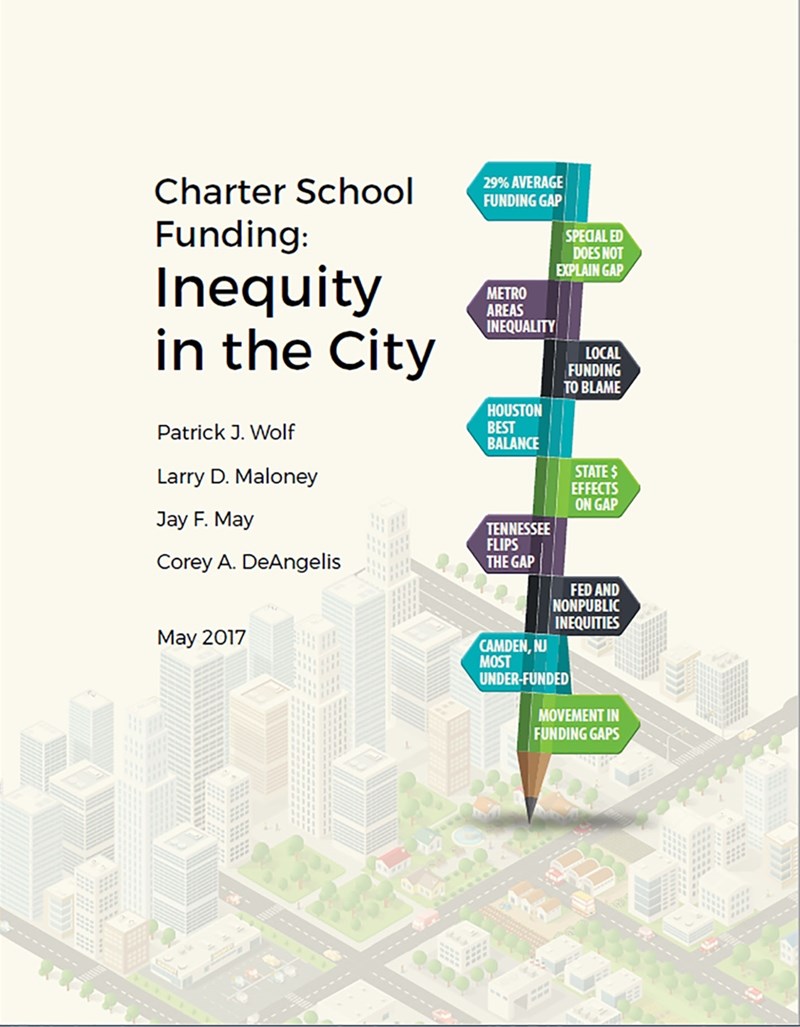 FAYETTEVILLE, Ark. – The average disparity in per-pupil funding between traditional public schools and their public charter school counterparts in metropolitan areas is $5,721, a gap of 29 percent, according to a new report issued today by a team of researchers in the Department of Education Reform at the University of Arkansas.

Funding from local sources is the chief reason for this disparity, representing a funding gap that favors district schools by, on average, $7,010 per pupil, or a difference of 74 percent. Local per-pupil funding for traditional public schools averages $9,534 compared to $2,524 for charter schools, according to the study.

The study, “Charter School Funding: Inequity in the City,” examines all sources of revenue, including federal, state, local and nonpublic dollars during the 2013-14 school year, and focuses on 14 cities across the nation with a high concentration of enrollment in charter schools. Charter schools in 13 of those 14 cities received less money per student than traditional public schools; 12 of those cities had a funding gap greater than 10 percent. New Orleans also is included in the study but is treated as separately because of the special circumstances surrounding public school funding in the aftermath of Hurricane Katrina.

Local funding sources, including property and sales taxes, are the biggest contributors to the disparity. In seven of the cities examined — Boston, Houston, Indianapolis, Little Rock, Memphis, San Antonio and Tulsa — charter schools received zero local dollars compared to district schools, which received anywhere from $3,000 to more than $15,000 per pupil. Only in Camden, the city with the greatest overall funding discrepancy, did local officials allocate $326 more to each charter school student than to each traditional public school student. The five cities with the greatest local per-pupil funding disparity were Boston at $15,301; Atlanta at $8,313; Denver at $7,849; New York at $7,388; and Houston at $6,910.

“These results should be troubling to anyone who believes that all public school children deserve access to the same amount of funding, regardless of which type of school they choose,” said Larry Maloney, lead researcher of the University of Arkansas team. “In this study, we see that students in public charter schools sacrifice about one-third of their educational resources by opting out of their traditional public schools. In other words, parents in our sample are willing to forgo, on average, $5,721 per year in order to send their child to a school they believe is a better fit for their family than their zoned school.”

“We continue to see that nonpublic philanthropic dollars alone cannot close the gap in funding for charter schools. And despite charter schools’ increased popularity and demonstrated positive effects on student outcomes, it is surprising that they must continue to do as much or more with less,” said Patrick J. Wolf,  Distinguished Professor and Twenty-First Century Chair in School Choice in the Department of Education Reform at the University of Arkansas. “We encourage state and local leaders to consider these results seriously as they allocate school funding, especially given that educational resources targeted to our most vulnerable students often miss their targets when those children are in public charter schools.”

Even after accounting for special education expenditures, which are often cited as the reason traditional public schools receive greater funding, charters in 11 of 14 cities remain significantly underfunded.

This year’s report is the first in a series of three studies to be released this year by the University of Arkansas team that looks at charter school funding. The second one will focus on funding in each of the boroughs in New York, and the final study will examine the return on investment between charter schools and traditional public schools, by comparing total dollars spent to student outcomes.

In 2013, 2014 and 2015, the University of Arkansas’s Department of Education Reform looked at similar charter school funding discrepancy trends, each of which showed that public charter schools tend to receive far less money than traditional public schools.

“Charter School Funding: Inequity in the City” is available at www.uaedreform.org/charter-school-funding-inequity-in-the-city.