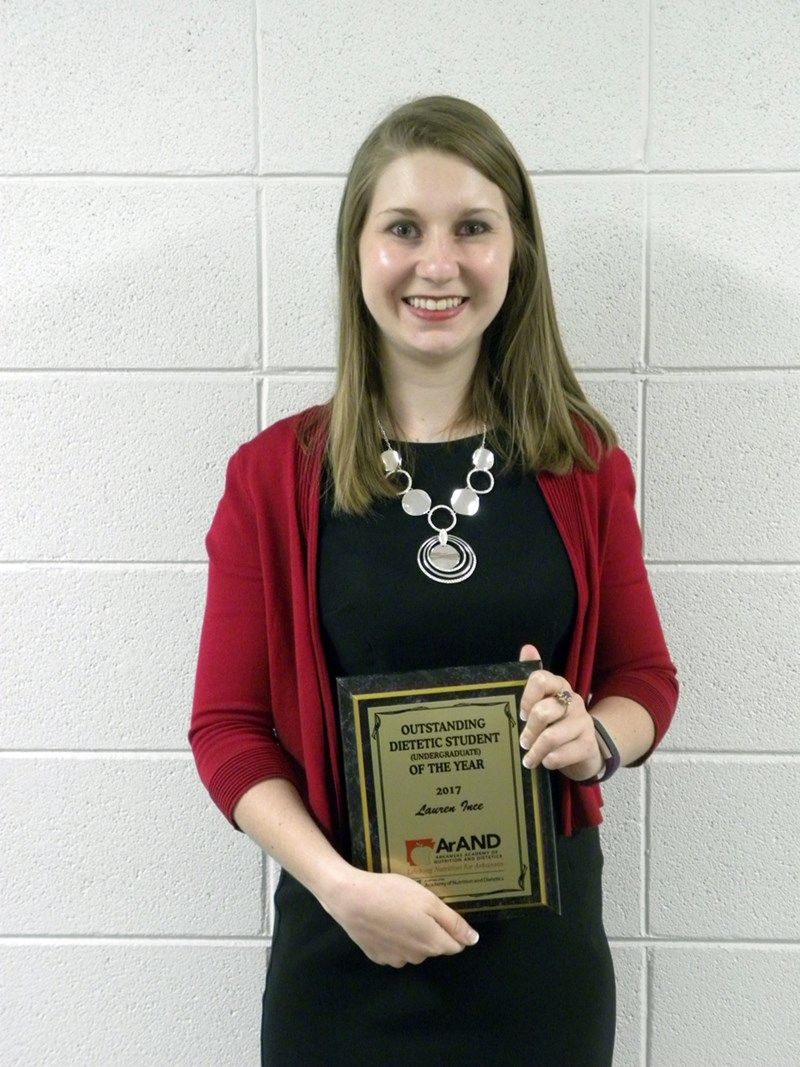 Junior Lauren Ince is the fourth Bumpers College student in the last five years to be named the state's Outstanding Dietetic Student by the Arkansas Academy of Nutrition and Dietetics.

FAYETTEVILLE, Ark. – Lauren Ince, a junior in the U of A's Dale Bumpers College of Agricultural, Food and Life Sciences, has been named the undergraduate Outstanding Dietetic Student by the Arkansas Academy of Nutrition and Dietetics.

Ince, a junior from Nashville, is majoring in human nutrition and hospitality innovation with a concentration in dietetics in Bumpers College's School of Human Environmental Sciences. Ince is president of the U of A Student Dietetic Association and vice president of Phi Upsilon Omicron, and is now eligible for the national award.

The award recognizes emerging leaders and high-achieving students in dietetics programs accredited by the Accreditation Council for Education in Nutrition and Dietetics, and encourages them to participate in the Academy of Nutrition and Dietetics at the local, state and national levels. Ince is now eligible for the national award.

"I am proud of Lauren," said Mechelle Bailey, clinical instructor and director of HESC's Didactic Program in Dietetics. "She is actively involved as president of the Student Dietetic Association, she is an outstanding student academically and has tremendous leadership skills. We have a strong history of producing quality students who are emerging leaders in the field of dietetics and Lauren is continuing that tradition. I am excited to see what her future holds."

Ince is the fourth Bumpers College student to win the award in five years. Taylor Martin was named the state's top student in 2013, Jessica Bradley in 2014 and Christina Crowder in 2015.

Ince will be working with the State Extension Office in Little Rock this summer. Her mother, Jean, is Howard County Extension Agent Staff Chair.

Ince was presented the award at the AAND annual meeting and exhibits in April in Little Rock. In addition, human nutrition instructor Nancy Buckley presented her research on the cooking skills of dietetic students before and after taking a Principles of Foods course. Buckley also presented at the national Academy of Nutrition and Dietetics Food and Nutrition Conference and Expo in the fall, and was a finalist in the Innovations in Teaching category.