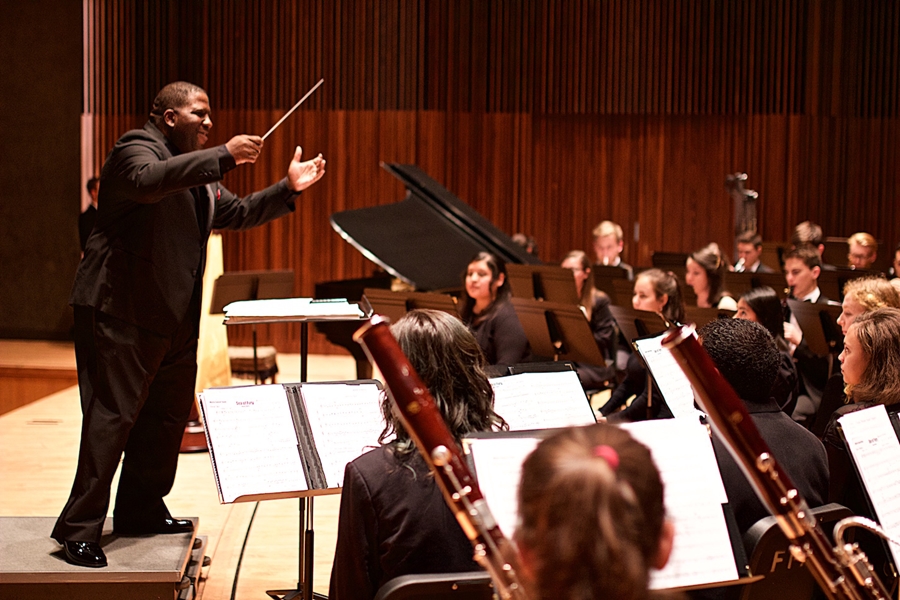 Jamal Duncan, assistant director of bands, will be the guest conductor for the Festival of Winds Honor Band on Saturday, May 6, at Hendrix College in Conway.

The event, hosted by Hendrix College and the Hendrix College Wind Ensemble, invites students and music educators from across Arkansas and surrounding states to take part in a day of music making.

"I am excited for the opportunity to represent the university, collaborate with in-state colleagues, and make music with students from across our region," Duncan said.

A highlight of the concert will be the performance of John Mackey's This Cruel Moon. The new piece received its Arkansas premiere by the University of Arkansas Wind Symphony in a joint performance with the Springdale High School Wind Ensemble on April 24 in Fayetteville.

An advocate of new music, Duncan conducts the University of Arkansas New Music Ensemble. Duncan is actively involved in the commissioning of new works and performing works on the cutting edge of contemporary concert music.

Duncan, a native of Flint, Michigan, taught in the public schools of Lansing, Michigan for seven years. He taught middle school band, music appreciation, and elementary general music. Duncan served as the music director and conductor of the Flint Youth Wind Ensemble, one of several youth ensembles in the Flint School of Performing Arts.

While at the festival, Duncan will give a lecture to music educators on choosing appropriate music for ensembles.

"For all conductors, selecting repertoire that meets students at the appropriate skill level but also has meaningful artistic merit can be a challenge" said Duncan.  "I hope to share a few principles that can assist conductors as they choose dynamic pieces for their students."

About the University of Arkansas Bands: The University of Arkansas Bands Program, inside the Department of Music in the J. William Fulbright College of Arts and Sciences, began in 1874 and is one of the oldest band programs in the country. The program has six ensembles including the Razorback Marching Band, Hogwild Band, and four concert bands with over 400 student members representing every college at the university.