Screening of Frontline's 'Exodus' on April 12 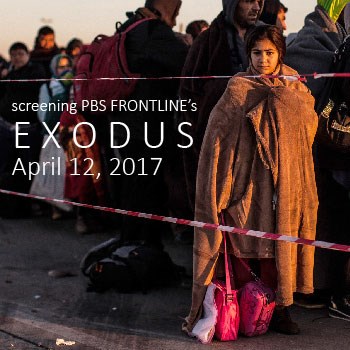 Students for Refugees and Gamma Theta Upsilon, with the King Fahd Center for Middle East Studies, will host a special screening of PBS Frontline's 'Exodus' from 7-9:30 p.m. on Wednesday, April 12, in Gearhart Hall room 26. This screening is free and open to the public.

This two-hour special draws on camera and smartphone footage filmed by refugees and migrants themselves — from inside a sinking dinghy on a route across the Mediterranean Sea where thousands have died, to the tents and fires inside Calais's notorious "Jungle" camp. Students for Refugees, a registered student organization focusing on refugee resettlement advocacy, and the geography honors society Gamma Theta Upsilon, hope to bring awareness to the hardships experienced by refugees displaced from their homes by violence and disasters.

"This documentary humanizes the refugee crisis, which is often viewed from an abstract perspective of numbers and statistics," says GTU president Chris Cowan. "To paraphrase a speaker from the film — anyone can become a refugee. It's not something that you choose; it's something that happens to you."

A talkback session will immediately follow the film screening with Joel Gordon, professor of history and King Fahd Center faculty member.  Gordon regularly hosts foreign film series Nadi Cinema, which introduces viewers to the storytelling and vision of filmmakers across North Africa and the Middle East.

This event/program is free to University of Arkansas, Fayetteville, students as supported by the Associated Student Government through the Office of Student Affairs and funded by the Student Activities fee. For questions or special accommodations, please contact GTU president Chris Cowan at cgcowan@uark.edu.