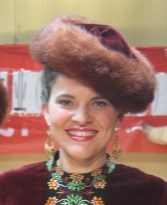 Elise Anderson, a doctoral candidate for dual degrees in Folklore & Ethnomusicology and Central Eurasian Studies at Indiana University-Bloomington, will present "Sufi Music in an Age of Terror: the Persistence of the Uyghur Muqam as Public Symbol in the PRC," a special guest lecture co-sponsored by the King Fahd Center for Middle East Studies and the Asian Studies Program at the University of Arkansas' J. William Fulbright College of Arts and Sciences.

Her lecture will take place at 6 p.m. Thursday, April 20, in Giffels Auditorium (Old Main Room 201) and is free and open to the public.

Both domestically and abroad, Chinese officials use the discourse and practices of the global war on terror to paint the Xinjiang Uyghur Autonomous Region (XUAR) as a hotbed of terrorism, and in turn, to enact restrictive policies and social controls on the Uyghurs in that region. The Uyghurs are a Muslim ethnic group living in Eastern and Central Asia with Turkic origins. The same Chinese officials are also eradicating minority languages, which have for decades been protected under Chinese law, from public schools in the province. And yet, government organs remain heavily invested in "developing" and promoting aspects of culture, such as Uyghur music.

In her lecture, Anderson will focus on the Uyghur On Ikki Muqami, a genre of music performance that has become a form of official culture in China over the past century, to explore how music with Sufi roots is able to maintain a highly visible public presence and a symbolic profile in a time when Islam is otherwise suspect in the People's Republic of China. Anderson, a trained vocalist and wind instrumentalist who focuses broadly on the performing arts of the Uyghurs, will incorporate musical performance into her lecture.

Anderson's research has been supported by grants from the Fulbright U.S. Student Program and Fulbright-Hays, among other sources, and focuses broadly on the performing arts of the Uyghurs. She is currently completing a dissertation about the institutionalization of Uyghur muqam, a musical mode and set of melodic formulas used to guide improvisation and composition, after living and conducting field research in Xinjiang for more than three and a half years. Anderson made her first foray into the world of stringed instruments when she began learning to perform folksong and muqam repertoires on the dutar in early 2013. She was a participant on the first season of Xinjiang Television's The Voice of the Silk Road, and has performed and recorded with some of the biggest names in contemporary Uyghur music.

About the Asian Studies Program:
The Asian Studies Program is an interdisciplinary area studies program in the J. William Fulbright College of Arts and Sciences at the University of Arkansas. The program draws on the strength of our faculty both in Fulbright College and in other colleges on campus to provide resources and training in Asian languages, cultures, history, politics and economics. In addition to offering a major and a minor in Asian Studies, the program supports research initiatives, study abroad and extra-curricular activities of faculty, students and the local community. The program strives to provide students with a well-rounded education essential for careers in which knowledge of Asia is vital, promote interdisciplinary research on the Pacific region, and serve as a source of knowledge and expertise for the community. More information about the program and its ongoing activities can be found at http://aist.uark.edu and on Facebook.