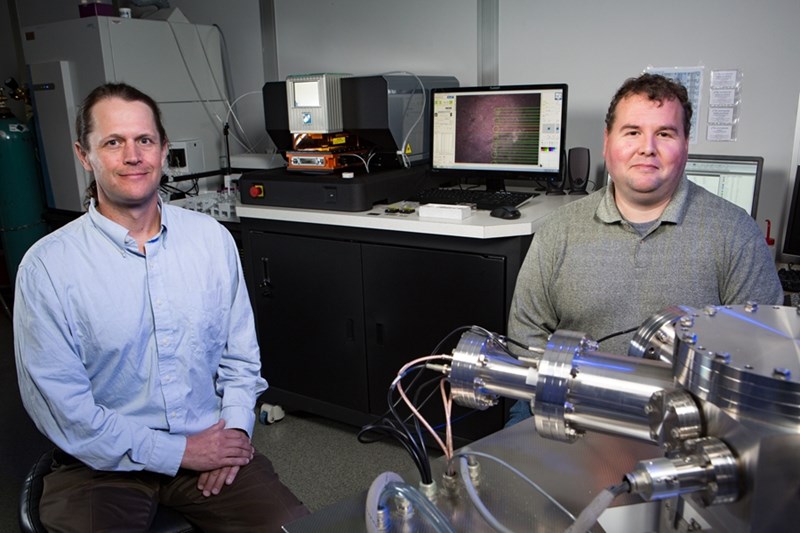 FAYETTEVILLE, Ark. – A new lab at the University of Arkansas will help scientists better understand ore deposits in the earth’s crust, how fossils form and what they can tell us about the earth’s climate, and accurately date some of the planet’s oldest rocks, among other uses.

It’s called TRAIL, or trace element and radiogenic isotope laboratory. TRAIL is made up of three main pieces of equipment: two mass spectrometers that the university already owned, and a new laser ablation system that can burn holes as small as seven microns — about one-tenth the diameter of a strand of human hair — into samples. The resulting vapor is directed to the mass spectrometers, one of which can identify trace elements and the other of which is used to study isotopic ratios – the difference in atomic mass of two or more forms of the same element. These measurements can aid in dating the geologic processes that formed the Earth’s crust, help identify the source of economic ore deposits such as lead and tin, and are useful as a means of studying paleoclimate through the chemical composition of fossilized teeth. The combination of instrumentation is unique in the state; in fact, it’s one of only a handful of facilities in the nation capable of this kind of research.

Before the addition of the new laser ablation system, researchers who wanted to perform trace element mass spectrometry had to dissolve samples in acid. Laser ablation is faster, less destructive and preserves spatial relationships in samples, which could ultimately prove to be more versatile.

The laser was purchased with a $542,000 grant from the National Science Foundation to geosciences assistant professors Gregory Dumond, Adriana Potra and Celina Suarez. The money also allowed the facility to hire research scientist Barry Shaulis, an expert in laser ablation. Prior to coming to the University of Arkansas, Shaulis was a post-doctoral researcher at the Lunar and Planetary Institute in Houston.

TRAIL manager Erik Pollock says laser ablation is more efficient and versatile than dissolving samples in acid. “There’s a time savings, and there is less waste. Not only can this be used by geoscientists, but also by chemists, biologists and engineers. One field develops a tool and other fields begin to think, ‘We could use that too.’ The grant is the capstone to the hard work of a diverse group of researchers including chemists, geoscientists and biologists.”

TRAIL is part of the Arkansas Statewide Mass Spectrometry Facility, established in 1999 with funds from the state and the National Science Foundation. It has also been funded by the Arkansas Bioscience Institute, and NASA. The facility’s mandate is to provide mass spectrometry capability for academic, governmental and industrial researchers throughout the state and nationwide.