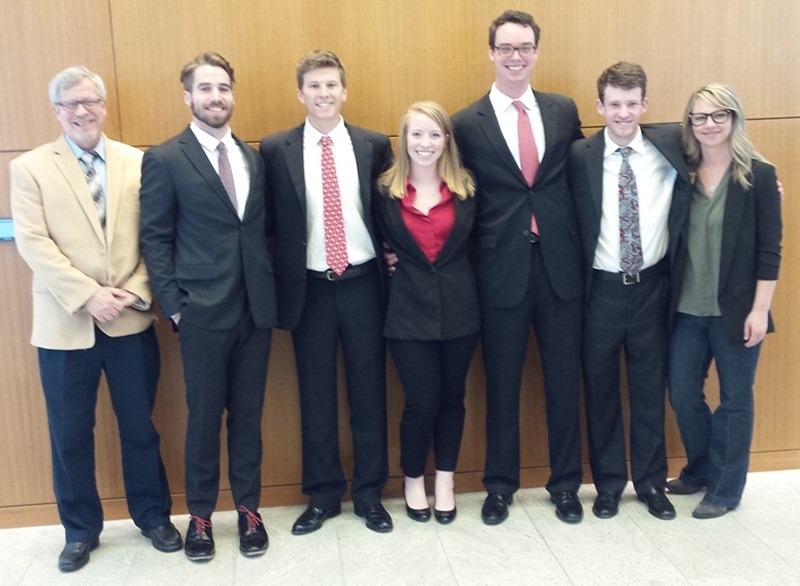 OKLAHOMA CITY – Five Master of Science geology students — Julie Cains, Stephen Denham, Riley Dickson, Sean Kincade, and Sidney Mahanay — formed the 2017 University of Arkansas Imperial Barrel Award (IBA) team from the Department of Geosciences. This team placed third in the regional competition against eight other teams from Oklahoma, Kansas and Missouri. The UA team was hosted in OKC by alumnus Bill Coffey (M.S.'82 geology) who is exploration manager for Devon.

The IBA program is offered every year by the American Association of Petroleum Geologists, who adopted it in 2007 from the Imperial College in the United Kingdom. This is now an international contest and allows participation from students around the world.

The UA IBA team was advised by adjunct faculty members Steve Milligan (B.S.'80 geology) and Jamie Woolsey (B.S.'04 geology, M.S.'07 geology). "In the face of current oil prices, it is even more important toward furthering their careers," said Milligan. "The skills acquired by IBA team members are used in oil and gas exploration, and are also valuable for all other venues of employment options when they graduate."

IBA teams have only eight weeks to process, evaluate, and present an industry-donated dataset that includes 2D or 3D seismic and well data. Team members divide duties to evaluate this data and prepare a prospect that has the greatest potential for producing oil or gas.  The presentations propose and defend a drilling location inside the data area and are equivalent to what will be expected in the petroleum industry. Team presentations are judged by an industry panel on use of science and technology, teamwork, creativity and style. The judges are members of the American Association of Petroleum Geologists with long industry experience.

"The IBA was one of the best experiences in geology for me so far" says team member Stephen Denham. "I gained valuable friends, knowledge, and skills that will continue to benefit me long into the future. Our success was a combination of hard work, the amazing advising staff, and the team. The competition showed me once again that the Geosciences Department at the University of Arkansas is one big family, and I am happy to be a part of that."

Added team member Julie Cains, "This competition takes us beyond academic exercises and exposes us to real-world petroleum exploration using real data, allowing us to apply fundamental geologic concepts to completely unfamiliar places and complete a technical evaluation down to the prospect level. I learned more in those short eight weeks than I ever could have imagined."