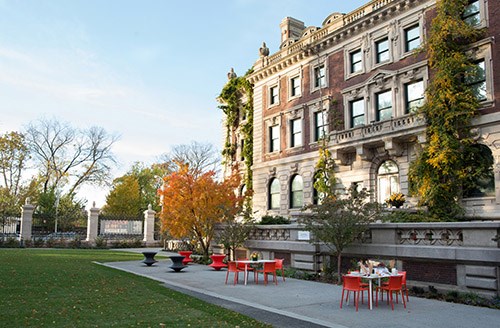 RAFT Landscape Architecture collaborated with Diller Scofidio and Renfro and Hood Design on the rehabilitation of the garden at the Cooper Hewitt Smithsonian Design Museum.

FAYETTEVILLE, Ark. – Matt Donham will present a lecture at 5 p.m. Monday, March 13, in Ken and Linda Sue Shollmier Hall, Room 250 of Vol Walker Hall, on the University of Arkansas campus in Fayetteville, as part of the Fay Jones School of Architecture and Design lecture series.

In his lecture, titled "Multiple Simultaneous Trajectories," Donham will discuss the necessity of balancing multiple competing purposes, which can include the interests of the public and the entity footing the bill to build the public realm.

Landscape architecture can be simple, with practitioners composing tangible objects in the world. Designers select materials, position trees, ensure drainage and make paths universally accessible. The practice also can be complex, supporting or inhibiting the success of a species. It can improve places, but sometime those places are improved so much that the people they were designed for are displaced in the process.

This lecture will address the multiple simultaneous trajectories at work in landscape architecture. Donham will trace his work and his life along several trajectories: profile, voice, income, self-awareness, confidence and health.

Donham holds a Master of Landscape Architecture from the College of Environmental Design at the University of California, Berkeley, where he studied the built environment at multiple scales and across disciplines with architects, city planners and urban designers. In his work, he applies additional perspective gained during his undergraduate study of urban history and architecture at Vassar College and Columbia University.

In his work at RAFT, Donham brings focus and generosity to the design and construction process. A former partner at PWP Landscape Architecture, he has managed large collaborative teams on major projects, such as the National September 11 Memorial in New York and Constitution Gardens on the National Mall in Washington, D.C. Currently, he designs campuses and civic spaces that foster lasting bonds between people and place.