Nursing Students to Take Advocacy, Empathy from Work With Homeless to Future Careers 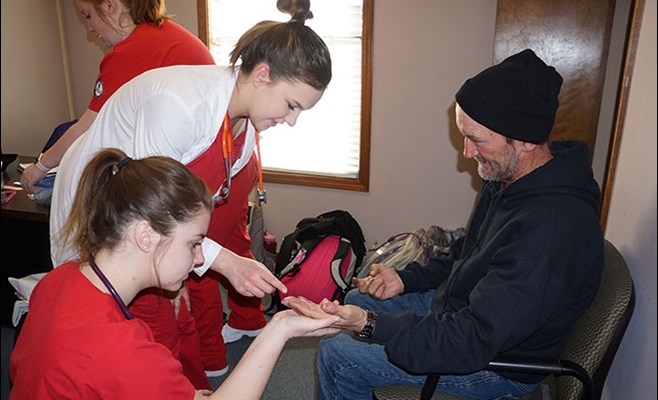 Courtney Hardy, left, and Madalyn Wallace look at the hands of a client of 7hills Homeless Center. He suffered burns to his fingers and later frostbite. 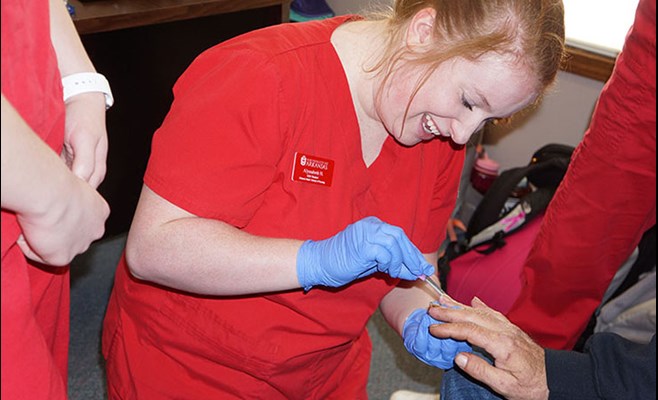 Alyssa Parsley files the client’s fingernails. The nursing students assigned to the day center helped care for his wounds that are now largely healed. 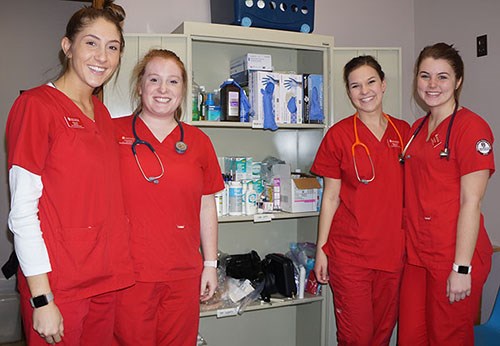 One thing University of Arkansas nursing students have learned working with homeless people is to think beyond immediate treatment, an outlook that will help in their future careers.

“It’s kind of like to have a home is to have health care,” said Dorian Nelson, a senior scheduled to graduate in May. “After you go to the emergency room, if your home is the wet, cold woods, it doesn’t matter that you had treatment. A lot of nursing is advocacy. Here, we work with case managers whose job it is to help the homeless in all aspects of their lives. They will leave here no better than they came in if we can’t help them with resources.”

In their seven-week clinical rotation at 7hills Homeless Center in Fayetteville this semester, eight seniors in the Eleanor Mann School of Nursing have gotten to know some homeless people in Fayetteville pretty well. The students have taken their blood pressure and checked their blood sugar. They have treated their wounds and made calls on their behalf for further medical treatment. They have heard the stories of the homeless people and learned about the challenges they face.

In addition to skills, they have learned a broader mindset they will take with them after they graduate in the spring. Several of the students said they plan to seek work in an emergency department or critical care unit of a hospital.

“I looked at the homeless as unfriendly and maybe scary,” said Joel Beal. “My perception of them was what a lot of college students may have, but after being at 7hills for a few weeks I changed my mind. They come from a lot of different backgrounds and often they are homeless not because of something they did but a bump they ran into along the way.”

The students have come to care about the people they see each week and know about their chronic conditions, he said.

“We have developed trust with them, and we work with other health-care providers to get them the help they need,” Beal said. “I have gained more empathy for the population and that may help me to better understand and take care of future patients by not being as judgmental towards their looks or how they act because I do not know what they have been through before I saw them.”

Nelson described helping a woman who came to the day center after taking her last dose of insulin that morning. She had a primary care provider who was in Bella Vista, a 45-minute ride by car, and when Nelson called the office, an appointment was not available for three days.

“She couldn’t wait three days to get more insulin,” Nelson said. “We applied online for a new primary care provider and we were able to get her an appointment two hours later. It is a difficult system to work through at times. We can be relentless calling until we get clients the care they need.”

Registered nurse Janet Gardner established the clinical rotation at the homeless center in January 2016 and places a different group of eight students there two times each semester. Gardner is an adjunct clinical instructor who supervises the students in their clinical placement that corresponds with a community health course taught by Carol Agana, instructor of nursing.

The students operate a general health clinic on Wednesdays and Thursdays and a foot-care clinic every other Thursday. They also provide services to people who live in transitional housing provided by 7hills, and they go to community lunches offered at local churches, taking basic health services to people who need them. They may be assigned to work at the front desk of the 7hills day center if needed, and they assist the social worker during the intake process when someone comes to the center for the first time.

Nelson said she has learned about the importance of an organization such as 7hills, which has professional staff employed to help the homeless. Giving some cash to someone standing by the roadside with a sign asking for help is not as effective as supporting 7hills and other organizations like it, she said, because of their ability to help people on a more long-term basis, getting them preventive health care and into permanent housing.

Alyssa Parsley said she understands better now why people who are homeless go to the emergency department of a hospital for treatment.

“It’s easier to get in and they won’t be turned away,” she said. “But, working here makes you think about broader aspects of treatment. If someone has to have surgery, do they have a place to go afterward to recover? We can’t always solve people’s biggest problems, but we try to meet them where they are and figure out what will work best with their lifestyle.”

The students each have to complete a teaching project during the clinical placement. Nelson developed a lesson about non-pharmacological things people can do between doctors’ appointments to improve their health. She looked at the project as a way of empowering the homeless to be less reliant on medical professionals and to take better care of themselves.

Courtney Hardy and Brette Mendes based their project on a suggestion from one of the homeless men they met at the shelter. He wanted them to research substances such as cough syrup that are easier to obtain than drugs that cause intoxication or a high.

“He wanted us to tell people about the short-term and long-term effects of these things,” Hardy said. “He wanted to get the word out to show people what could happen to them. So, we made a poster that we will leave here at the center.”

Each education project generally results in a poster or other printed material such as a pamphlet that the students leave behind to continue to educate clients.

Other students in the clinical placement the first half of the semester are Grace Dormois, Brooke Hotchkiss and Madalyn Wallace.