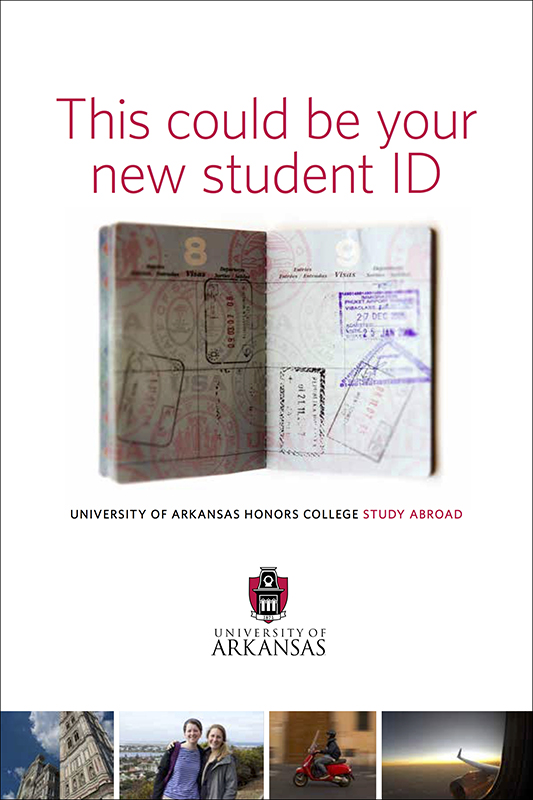 This brochure was part of the "This is Your Classroom" communications campaign, which has won an Award of Excellence in the CASE District III Award Program. The campaign helped spark a 50 percent increase in honors student participation in study abroad.

The University of Arkansas Honors College, in partnership with University Relations and DOXA, a local design firm, won two awards in the 2016 CASE District III Award Program, which "recognizes the very best in advancement across the Southeast."

The University of Arkansas team won an Award of Excellence in the category of Programs and Projects/Sub Unit Campaign, for the "This Is Your Classroom" study abroad campaign, which included a brochure and postcard; a feature article in A+, the Honors College magazine; and three videos: Mozambique: Making a Difference, Rome: A Classic Experience, and Panama: Researching Public Health.

The Mozambique video also was recognized with a Special Merit Award in the Electronic and Digital Media/Recruitment Video category.

"Thanks to these materials, honors participation in study abroad increased by nearly 50 percent in 2016, and we saw an 87 percent jump in study abroad grant applications last year," said Lynda Coon, dean of the Honors College. "They were certainly effective in helping us reach our goal, which is to send our students around the world to study, serve and conduct research. We value the opportunity to partner with our friends at University Relations, and we're so pleased that our team has won recognition for their efforts to promote the tremendous international education opportunities here at the U of A."

"These awards serve as continuing validation of the partnership between University Relations and the Honors College," said Roy Cordell, senior creative director for University Relations. "Our video production and communication teams continue to excel at telling the stories of our students and faculty around campus and around the world. We're thrilled to be able to help the Honors College and university reach their desired goals."

The videos in the "This is Your Classroom" campaign were previously recognized with four awards in the 37th Annual Telly Awards, a national competition that "honors the very best film and video productions, groundbreaking online video content, and outstanding local, regional, and cable TV commercials and programs." The University of Arkansas team received a Silver Telly, the competition's highest honor, in the Web Series category for all three videos in the series, and the Mozambique video received a Bronze Telly in three categories — Education, Copywriting and Videography.