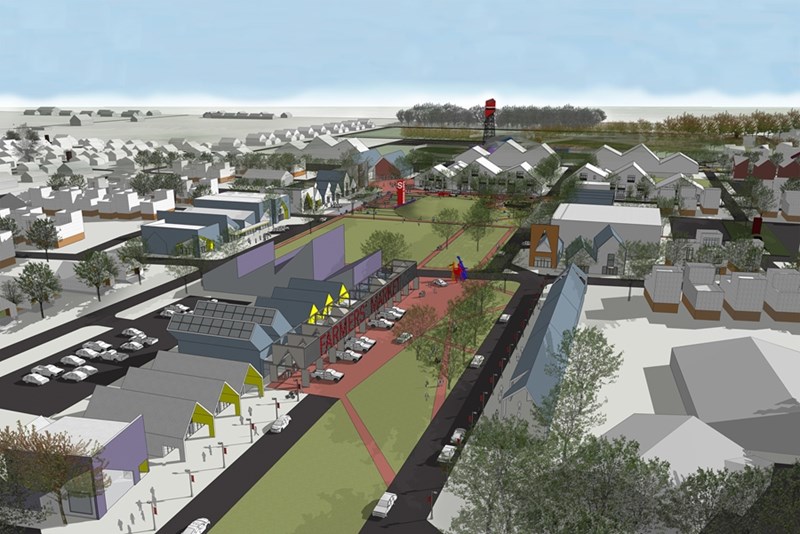 Artwork courtesy of U of A Community Design Center

FAYETTEVILLE, Ark. – The American Institute of Architects has awarded the University of Arkansas Community Design Center a 2017 Institute Honor Award for Regional and Urban Design for its tornado recovery plan “Reinventing Vilonia.”

The small town north of Little Rock was struck by an EF4 tornado in April 2014. The tornado, which also hit nearby Mayflower, was the nation’s deadliest that year, killing 16 people and destroying more than 400 homes in total. Both towns are in Faulkner County, which is considered a “tornado alley,” with more than 40 tornados touching down in the area during the past 50 years.

During the past 15 years, tornados have set new records for frequency, devastation and wind speed, Luoni said. According to meteorologists, the only safe refuge now is below ground. Even reinforced building cores like bathrooms, closets and stairwells were inadequate in the EF4 storm that hit Vilonia.

“This reinvention plan begins with the urbanization of safety – a strategy to create an underground safe room network that can be used in other middle-America towns in tornado alleys,” Luoni said. The plan requires the development of a new town center to bring people together, combining safe room infrastructure with a park system along a new town loop.

In such a scenario, residents and visitors alike are within a five-minute walk of an underground safe room, Luoni said. The safe room network is constructed from a modulated system of shipping containers that hold between 30 and 240 people. Landmarks pointing to the safe rooms function as community “hearths” – organizing a set of public spaces, such as parks, squares, trails and neighborhood green spaces.

The reinvention plan also focuses on expanding commerce and housing for the rapidly growing area, projected to reach a population of 10,000 from 4,226 by 2030.

The Federal Emergency Management Agency encourages planners to work with the people affected, rather than coming in and imposing their ideas on a neighborhood or town.

The Central Arkansas Planning and Development District hired the Community Design Center to work with organizations in Vilonia and Mayflower, with grants from the U.S. Department of Commerce. Collaborators on the Vilonia project included the Institute for Economic Advancement at the University of Arkansas at Little Rock, Metroplan and Rebuild Vilonia.

The Community Design Center is one of six design studios in the country designated a Regional Resilience Design Studio by the AIA Foundation, as part of its National Resilience Initiative. The initiative calls for a network of design studios dedicated to helping local communities become better prepared to recover from the impacts of natural disaster and climate change.

“Reinventing Vilonia,” one of five award winners in the category of Regional and Urban Design, will be featured in the May 2017 issue of Architect magazine and at the awards ceremony during the annual AIA Expo and Convention in Orlando in June.

This is the center’s 13th AIA Honor Award for Regional and Urban Design.

About the University of Arkansas Community Design Center: The University of Arkansas Community Design Center was founded in 1995 as part of the Fay Jones School of Architecture and Design. The center advances creative development in Arkansas through education, research, and design solutions that enhance the physical environment. It has provided design and planning services to more than 50 communities and organizations across Arkansas, helping them to secure nearly $65 million in grant funding to enact suggested improvements. In addition to revitalizing historic downtowns, the center addresses new challenges in affordable housing, urban sprawl, environmental planning, and management of regional growth or decline. The center’s professional staff members are nationally recognized for their expertise in urban and public-interest design, and their work has received more than 110 design and planning awards. For more information visit uacdc.uark.edu.