U of A Students Named Finalists for Nationally Competitive Fellowships 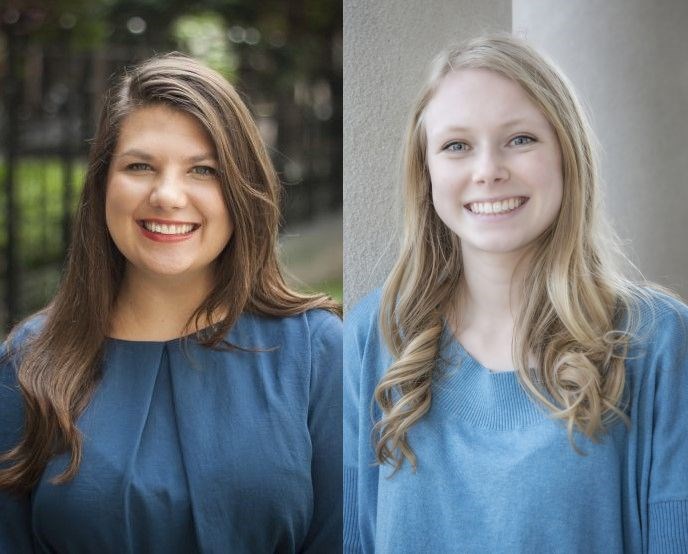 FAYETTEVILLE, Ark. – Autumn Lewis, a recent University of Arkansas honors graduate, and Madeline Meier, a current honors senior, are both finalists for nationally competitive fellowships to study in the United Kingdom. Lewis was named a finalist for the Gates Cambridge Fellowship; Meier is a finalist for the National Institutes of Health Oxford-Cambridge Fellowship. Both awards fund graduate study in the United Kingdom.

“The University of Arkansas is very proud of Autumn Lewis and Madeline Meier and their many accomplishments and for being selected to interview in these incredibly competitive scholarship applications,” said James Coleman, provost and executive vice chancellor for academic affairs. “They have both been academically stellar students on our campus, but they have also been young people committed to service. They have both made a real difference on our campus and in our state, and I know they will continue to be effective leaders in this state and beyond it in the years to come.”

The Gates Cambridge Scholarship, established in 2000 by the Bill and Melinda Gates Foundation, allows for post-graduate study at the University of Cambridge. Ninety-five scholarships are awarded every year, 40 to American students. Four University of Arkansas students have been named Gates Cambridge Scholars in previous years: Ryan DuChanois in 2016, Mariel Williams Young in 2013, and David Deitz and Lance Owen in 2006.

University of Arkansas students who are interested in applying for competitive scholarships like the Gates Cambridge or the NIH Oxford-Cambridge Scholars Programs should contact the Office of Nationally Competitive Awards at awards@uark.ed.

Lewis, graduated summa cum laude from the University of Arkansas in 2014, with degrees in political science and economics from the J. William Fulbright College of Arts and Sciences. Her interest in education and politics at the state and federal levels has taken her across Arkansas and on to Washington, D.C. As an undergraduate, Lewis was named a Presidential Fellow at the Center for the Study of the Presidency and Congress. Her undergraduate honors included earning a Senior Honor Citation as the top female graduate of 2014, as well as the Henry Woods Student Leadership Award from the Division of Student Affairs and the Harry M. Alexander memorial award from the Political Science Department. She was an Honors College Fellow, a research assistant for professor Janine Parry, and served in the Associated Student Government as a senator and chief of staff.

After graduating, Lewis worked as director of advance and auxiliary relations for Mark Pryor’s Senate campaign in 2014, and then as a staff assistant in Pryor’s Washington, D.C., office. Later, she worked as a policy analyst and manager of aspiring teacher initiatives for the National Council on Teacher Quality, an education reform nonprofit.

Lewis hopes to pursue a Master of Philosophy in Public Policy at the University of Cambridge, then spend her career addressing the gap in educational achievement based on socioeconomic status.

“I want to return to Arkansas and work to expand access to quality education for all children, regardless of the neighborhood in which they are born,” she said. She also hopes to found an advocacy group focused specifically on the education issues and policies of Arkansas “to ensure schools have adequate funding, effective teachers, and a strong curriculum in order to give each child opportunities for success.”

Meier is an honors senior chemistry major in the Chemistry and Biochemistry Department of Fulbright College. She worked with associate professor David Paul to investigate a process that could have important medical and environmental applications. Their work resulted in a recent publication in the Journal of the Electrochemical Society, with Meier as a second author. Meier has used her summers to pursue research abroad dealing with global issues.

In addition to her research, Meier has worked to improve sustainability across campus by helping Greek organizations to develop and implement a recycling program, leading several student recycling drives and creating a sustainability representative position to foster communication between the Office for Sustainability and Greek Organizations.

Meier plans to use her graduate studies to continue to investigate new methods and materials to detect indicators of disease and environmental concerns in real time.

“I hope to combine such new discoveries with current technology to develop point of care medical and environmental diagnostics to use in developing countries, where infectious diseases and environmental concerns are highly prevalent,” she said. Eventually, she hopes to complete a doctorate in analytical chemistry with an emphasis in biotechnology, and combine her passions for research and teaching as a professor.