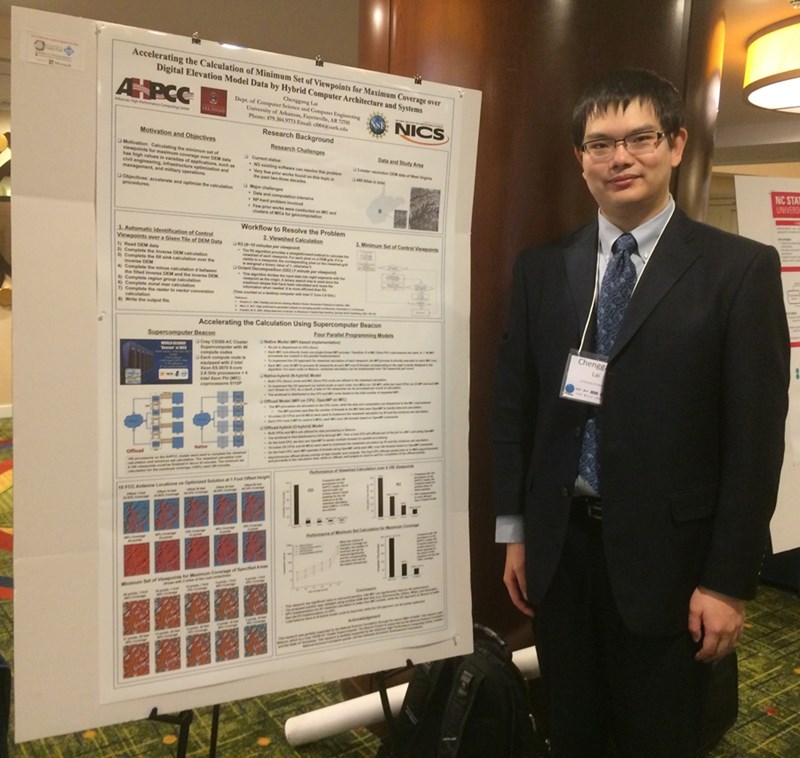 Chenggang Lai, a graduate student in the Department of Computer Science and Computer Engineering in the College of Engineering, has won second place at the ACM SIGSPATIAL Student Research Competition.

Held in October, this international student competition was a part of the 24th ACM SIGSPATIAL International Conference on Advances in Geographic Information Systems, which was created to bring together researchers, developers, users and practitioners in relation to novel systems based on geospatial data and knowledge. It is an event in a series of symposia and workshops meant to foster interdisciplinary discussions and research in all aspects of geographic information systems.

As a finalist, Lai received a $500 travel grant for his participation in the competition, and received another $300 grant for the second place award. His winning research paper was titled "Accelerating the Calculation of Minimum Set of Viewpoints for Maximum Coverage over Digital Elevation Model Data by Hybrid Computer Architecture and Systems."

The Student Research Competition allows both undergraduate and graduate students to submit timely research obtained primarily by the students, or a current development that entails a considerable amount of work completed by students.

The Student Research Competition was established to give undergraduate and graduate students the opportunity to share their research results and exchange ideas with other students, judges, and conference attendees, as well as to help them understand the practical applications of their research. The competition also allows students to receive prizes and attain recognition from ACM, as well as the greater computing community.

Students' submissions were judged on the basis of originality, influence, methods, outcomes and contributions to the field of spatial systems and algorithms. The competitors attended the SRC session during the ACM Conference with posters made to demonstrate their work.

Those selected to move on in the competition gave 10-minute speeches regarding their research projects in front of the judging committee and conference attendees, and winners were announced during the conference.

"Chenggang Lai is my graduate assistant funded by my National Science Foundation grant," said Xuan Shi, assistant professor of geoinformatics in the Department of Geosciences within the J. William College of Arts and Sciences.

Lai's research may be able to save the Federal Communications Commission and other telecommunication companies a lot of money by reducing the amount of FCC antennas needed to cover the same amount of terrain."

In his research, Lai found a way to reduce the time a supercomputer used to process large amounts of data. For his project, he was able to remotely access a supercomputer called Beacon, which is located at the National Institute for Computational Sciences at the University of Tennessee. He used the computer to process digital elevation data, looking for the highest elevation points in an area. Data like this could be useful in several applications, such as deciding where to place cell phone towers for maximum coverage.

Lai found a way to get the required information in fewer steps, reducing the time spent on the task from a couple of days to a couple of hours. After that, he experimented with several different ways to divide up the required processing tasks between two parts of the supercomputer, the central processing unit, or CPU, and the many-integrated cores, or MIC. He found that when the data was split in half between the two parts, the processing time was reduced by 50 percent. He explained that the computer and the data he used was a test case, and that his general approach could be applied to many different systems and data sets.

For more information about the ACM SIGSPATIAL Conference or SRC, visit their website http://sigspatial2016.sigspatial.org.