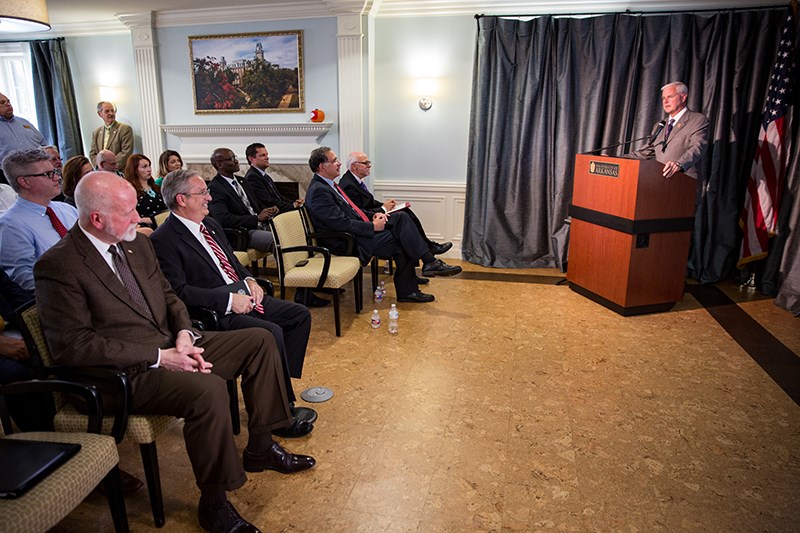 SEFOR was a 20-megawatt sodium-cooled nuclear test reactor that was decommissioned in 1974, when its nuclear fuel and coolant were removed. The U of A has been caretaker of the facility since 1975. Dismantlement of the facility has been more than four decades in the making, with this funding coming through with the help of two senior members of Arkansas’ Congressional delegation. The dismantlement and clean-up are expected to take about one and a half years to complete.

Chancellor Steinmetz noted that the cost of maintaining SEFOR required significant resources from the University.

"We need to refocus these resources to better serve our students and faculty," he said.

“The university really wants to thank our congressional delegation and especially Congressman Womack and Sen. Boozman for supporting the Department of Energy funding to clean up SEFOR,” said Jim Rankin, vice provost for research and economic development.  “This is the first step in returning the site to green field and we appreciate their support as we pursue the remaining funding.”

“The complicated issues inherent with cleaning up a deactivated reactor present a number of unique challenges,” Womack said. “I am pleased that the prolonged effort to decommission and dismantle SEFOR will soon be completed after years of cooperation between the U of A, our delegation, and DOE culminating with this grant. I look forward to seeing this environmental concern in Northwest Arkansas completely resolved.”

“I am pleased to learn that the Department of Energy has awarded this grant to fund the University of Arkansas’s efforts to decommission and dismantle SEFOR. The SEFOR cleanup has been an ongoing priority for the university and the community. This funding will be instrumental in helping to move this project toward completion,” Boozman said. “I advocated for federal funding for the cleanup through the Senate Appropriations Committee and have emphasized the importance of this project. This development brings us one step closer to fully decommissioning SEFOR in a safe and responsible manner.”

SEFOR was built near the Strickler community in Washington County in 1968. The test reactor was funded by the U.S. Atomic Energy Commission and operated from 1969 to 1972 by the Southwest Atomic Energy Associates, a group of 17 investor-owned electric utilities. SEFOR was fueled by plutonium oxide-uranium oxide and was developed to get the data needed to design and operate large-scale commercial sodium-cooled reactors.

SEFOR was shut down after its experimental program ended, its nuclear fuel and sodium coolant were removed and disposed of off-site, and it was officially deactivated in 1974. The University of Arkansas took possession of the facility in 1975 and used it for instrument calibration and research until 1986. Since then the university has essentially served as a caretaker for the unused site, while trying to get the funding to remove the hazardous materials, demolish the buildings, and return the area to green field conditions.