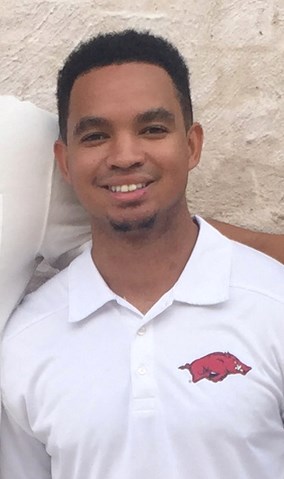 A speeding ticket after freshman orientation – one that raised the cost of his car trip from about $70 to nearly $300 – planted the idea with Byron Alley that there had to be a better way to and from the Fayetteville campus of the University of Arkansas for students who live in Texas.

"I was pulled over while driving through Oklahoma," said Alley, now a junior finance major at the Sam M. Walton College of Business. "I was confused about why the sheriff decided to pull me over while I was going 40 in a 40 zone.

"He already had the speeding ticket printed out because an unmanned drone clocked me traveling 90 miles per hour 10 miles ago, and the sheriff was given the year, make and model of the car electronically. He was just waiting to pull me over."

After a freshman year on campus without a car, contemplating complex airline flight plans or begging friends for a backseat ride home at Easter, Alley decided he had to do something about a simpler, cheaper ride if no one else was going to.

"I asked myself, 'If there are more and more kids coming from the Dallas area that is six hours away, and most parents do not want to let their new high-school graduate drive a car to Fayetteville for the first semester, why isn't there an alternative service that students could use going and coming from campus to the Dallas-Fort Worth area?'" Alley said.

Thus the birth of Hog Ride, U of A student transportation via Wi-Fi-enabled charter buses from Fayetteville to two park-and-ride locations in the Dallas Metroplex and back.

Alley plans to kick off the charter bus service over Thanksgiving break.

The Hog Ride buses have reclining seats, and the Wi-Fi will allow riders to do homework or enjoy surfing the web during the trip, Alley said. Passengers can reserve a specific seat on the bus through the Hog Ride reservation system, which is similar to an airline booking system. Passengers with reserved seats will get priority boarding. The reservation system requires riders to set up an account with Hog Ride.

Students will be able to bring their own food and beverages on the bus, Alley said.

"Hog Ride offers a transportation option that makes sense for college students traveling a few hours to and from campus," Alley said. "This option is safe, efficient and comfortable."

The Hog Ride bus plans to depart from Lot 56 on Razorback Road and from two locations in the Dallas/Fort Worth area for the return trip.