U of A Enrollment Hits 27,194 Students As Overall Diversity Reaches New High 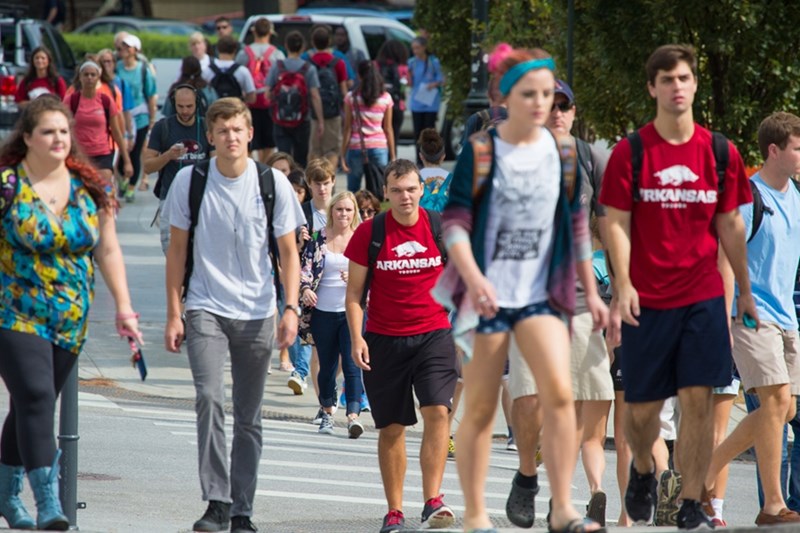 FAYETTEVILLE, Ark. – The University of Arkansas enrolled 27,194 students for the fall 2016 semester, another record number, according to a preliminary evaluation of the “11th day snapshot” taken on Sept. 6.

All institutions of higher education in Arkansas report their “11th day” enrollment figures to the Arkansas Department of Higher Education based on a capture of data from the eleventh day of the semester. Official enrollment figures won’t be available until they are sent to the department on Oct. 19.

Total U of A enrollment has increased 17.2 percent since 2011, but this year’s growth is only 1.6 percent above last year’s. This more sustainable rate of growth is welcome as the university assesses future goals and how many students the campus can actually support, especially from the perspectives of student services and the number of faculty and staff needed.

The preliminary figures show that 56.2 percent of U of A students are from Arkansas, nearly 15,300 students.  Students from out of state make up 38.4 percent of the total enrollment. International students make up 5.4 percent of the student population.

Diversity has also increased overall, with 19.1 percent of students defined as “minority,” a new record for the University. In the freshmen class minority students make up 20 percent of the new students, also a new record.

There are more women students than men for the fourth year in a row, and the gender gap is growing: 52 percent of students are women, compared with 48 percent men.

“I’m proud that the university has reached an all-time high for the number of underrepresented students we have enrolled,” Chancellor Joe Steinmetz said. “We’re working hard on that and believe our campus is more inclusive than ever before. We also came within a handful of students in the freshmen class of reaching a 50-50 balance between students from Arkansas and students from other states. I think we can do better but we simply need more financial aid for Arkansans. I don’t think it’s any secret that increasing the number of need-based scholarships is one of my top priorities. We want more Arkansas students to enroll and we can make that happen with additional support for scholarships for Arkansans."

The incoming freshman class is the largest and best qualified in U of A history, with 4,967 new first-time degree seeking students.

The average high school grade point average for all freshmen is 3.68, and the average ACT score is 26, both averages higher than in past years.

Students from Arkansas make up 49 percent of the new freshman class, with 50 percent from out-of-state, while 1 percent are international students.

There are more women students than men in the freshmen class: 55 percent women, 45 percent men.

“We are very pleased by both the diversity and the quality of this freshman class,” said Suzanne McCray, vice provost for enrollment and dean of admissions.  “We have a record high number of students from diverse communities on campus, and over 1400 students are eligible to participate in the Honors College.”

The incoming class of 88 freshman honors fellows is one of the strongest ever, with an average high school GPA of 4.2 and ACT composite score of 33.77 – both all-time highs – and 31 National Merit Scholars. 82 percent of these new fellows come from Arkansas, representing 28 different hometowns. 26 percent of all fellows are first-generation students.

The J. William Fulbright College of Arts and Sciences remains the largest college, with 7,932 students, a 1 percent increase from last year. The number of new freshmen declaring as majors in Fulbright College departments increased by 6 percent from 2015. Fulbright College also claims 36 percent of all Honors College students at the U of A this fall.

The College of Education and Health Professions is the next largest college, with 5,500 students. This is a 1.7 percent increase at a time when overall numbers of education pre-service enrollment is down across the state. The health-related majors in the college, such as nursing, public health, recreation and sport management, and communication disorders, also continue to increase in enrollment.

The College of Engineering enrolled 4,285 students this fall. Women make up 23.9 percent of the undergraduate population, the highest number in the history of the college. There are 227 transfer students, reflecting successful partnerships with Arkansas community colleges. In the freshmen class 52 percent of the new engineering majors are students who are underrepresented in the field of engineering, including women students, minority students and first-generation college students.

The Dale Bumpers College of Agricultural, Food and Life Sciences has a record 2,173 students. Within the college 835 of the students are enrolled in the School of Human Environmental Sciences. Agricultural economics and agribusiness leads the departments with 314 students, a 10 percent increase over last year, while animal sciences is second with 307 students, a 12 percent increase.

The Fay Jones School of Architecture and Design has 469 students in its programs, 55 percent of them women. There are an increased number of landscape architecture students, and a strong cohort of international students are enrolled from around the world, drawn by the school’s global reputation.

The Honors College has 1,049 freshman students this year, a 6 percent increase over last year. Overall honors enrollment is now 3,120 students, with 57 percent of them from Arkansas, 15 percent are the first-generation college students, and 21 percent receive financial aid.

Graduate School enrollment is up 1.3 percent, with a total of 4,275 students enrolled for the fall term. Increasing the campus’ percentage of graduate students has become an institutional priority. The roles these students play in teaching and research are critical in advancing the university’s research mission. Graduate student contributions are fundamental to the university’s distinction of being classified with the level of research activity by the Carnegie Foundation.

The School of Law met its targeted goal for the year with total enrollment of 371 students and an incoming class of 117. More than 80 percent of the entering students are from Arkansas. The class includes the school’s largest percentage of women and is one of the most diverse in its history.