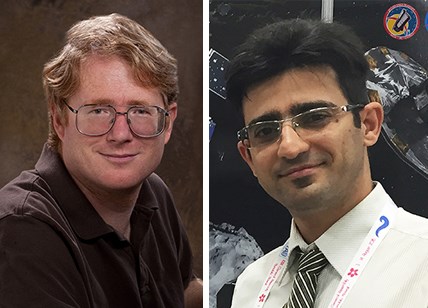 FAYETTEVILLE, Ark. – Astrophysicists at the University of Arkansas have discovered a mechanism for the formation of the spiral arms in disk galaxies.

The finding was published in The Astrophysical Journal Letters, the journal of the American Astronomical Society.

The discovery provides a better understanding for the formation of spiral arms in a kind of disk galaxy known as a spiral galaxy, said Hamed Pour-Imani, a physics doctoral student at the U of A and lead author of the study.

Spiral arms are the elongated and curved spiral sections that are connected to the center of a spiral galaxy, such as our own Milky Way.

“Spiral galaxies are fascinating structures in astronomy, and the exact mechanism of the formation of spiral arms is still a mystery in astrophysics,” Pour-Imani said. “Our work provides strong evidence for the density wave theory of spiral galaxies, which is one of two popular theories to explain the spiral structures.”

Previous research either failed to find any significant variation in pitch angle or only limited evidence for it, Pour-Imani said. In this study, U of A astrophysicists used an optical wavelength image for disk galaxies and images from the NASA Spitzer Space Telescope at two infrared wavelengths. The pitch angles agreed with the density wave theory.

Pour-Imani is a member of the member of astrophysics research group led by Daniel Kennefick, associate professor in the Department of Physics and faculty member in the Arkansas Center for Space and Planetary Sciences.

The results were obtained through a collaboration that included Julia Kennefick, associate professor of physics and the space and planetary sciences center; Benjamin L. Davis, a U of A space and planetary sciences graduate who is now a postdoctoral fellow at the Swinburne University of Technology in Melbourne, Australia; and U of A doctoral students Douglas W. Shields and Mohamed Shameer Abdeen.

The research included the use of the NASA/IPAC Extragalactic Database, which is operated by the NASA Jet Propulsion Laboratory at the California Institute of Technology.