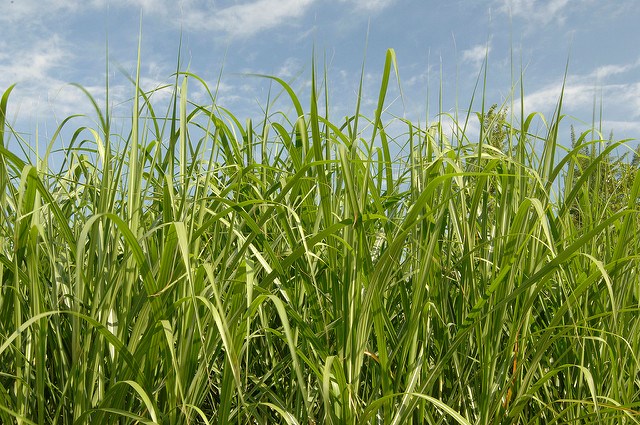 A University of Arkansas researcher is investigating a critical roadblock to harvesting biomass from perennial plants, such as grass, for the purpose of creating renewable energy.

FAYETTEVILLE, Ark. – A University of Arkansas chemistry professor has received a $400,000 award from the National Science Foundation to investigate a roadblock in the harvesting of biomass from perennial plants for the purpose of creating a source of renewable energy.

“Biofuel derived from perennial plants, such as grass and common weeds, is most desirable because these plants grow on marginal land and can be harvested repeatedly,” said Feng Wang, associate professor of physical chemistry in J. William Fulbright College of Arts and Sciences. “But first we have to solve the problem of breaking down cellulose fibrils before biomass can be considered an economically viable source of renewable energy.”

Cellulose fibrils are microfibers of inert carbohydrates within plants. They give wood its durability, for example. Through a process known as pretreatment, chemists separate these fibrils into individual carbohydrate chains that can be digested by enzymes. This process takes a long time, but Wang and other chemists are studying ways to speed it up.

Computational modeling is an important route toward understanding this process. Wang will develop computer models of cellulose fibrils to help scientists understand how they interact with water, alternative solvents and enzymes. His and other models will also lead to the design of catalysts for the pretreatment and hydrolysis of biomass.

The reliability of this kind of computer modeling depends on the accuracy of a mathematical model for intermolecular interactions. Sometimes called an “interaction potential” or “force field” by chemists, these mathematical models can be viewed as similar to engineering diagrams for machines, such as an elevator or an automobile.

Wang will use a method called adaptive force matching, which relies on a process using repeated iterations for developing simple but highly efficient and accurate force fields.

“The beauty of this method is that it allows us to develop accurate force fields without using complex energy expressions,” said Wang. “And maximizing its simplicity will enable larger structures to be modeled efficiently.”

Using the adaptive-force-matching method as a reliable protocol for mapping the molecular energy landscape of cellulose fibrils will have broad impact for computational chemistry and material research in general, Wang said. The ultimate goal is to understand the mechanisms that prevent scientists from making clean and renewable fuel from biomass, which would decrease reliance on fossil fuels and reduce carbon emissions.

Wang has been a chemistry and biochemistry professor at the U of A since 2012. In 2013 he received a Faculty Early Career Development Program, better known as a CAREER award, from the National Science Foundation, one of the highest honors given by the foundation to junior faculty members.