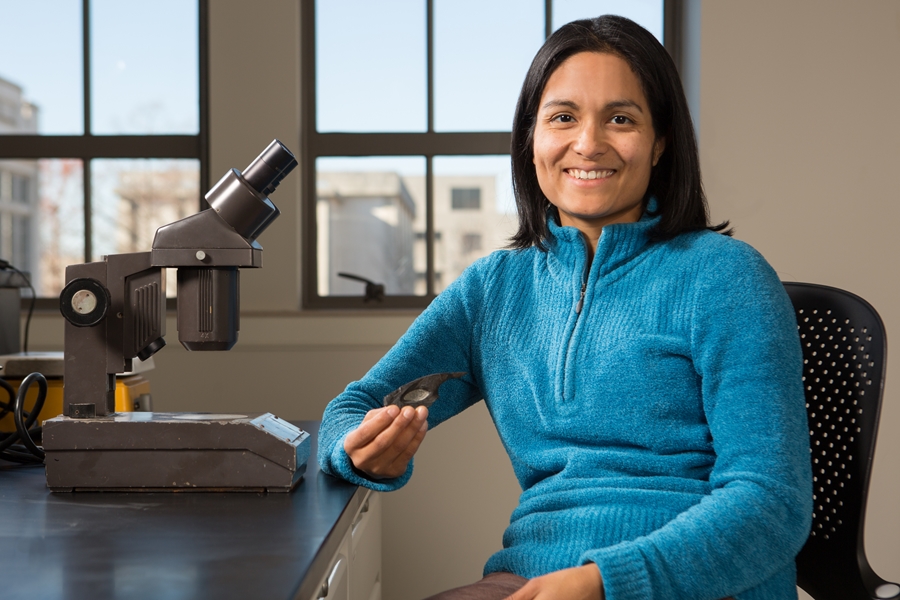 Only seven researchers in the nation are among the inaugural class of Deep Carbon Observatory Diversity Grant recipients — including Celina Suarez, assistant professor of geosciences from the J. William Fulbright College of Arts and Sciences.

Suarez recently received the award from the American Geosciences Institute, which established these grants to support geoscience researchers with funds for national and international conferences to present Deep Carbon Observatory-affiliated research and attend DCO-related workshops, conferences and events. The funds also support lab or fieldwork that advances DCO-aligned research, or instrumentation time at DCO-affiliated facilities.

"Dr. Suarez's work is on the forefront of ecology and climate research," said Ralph Davis, professor and chair of the Department of Geosciences, and associate vice provost for Research and Economic Development at the University of Arkansas. "Though she's won many previous awards including an NSF fellowship, this latest accomplishment serves to further validate the importance of her research on a global scale and to support her continued successful track record of discovery."

Suarez's research has already taken her to locations such as the Cretaceous Cedar Mountain Formation of Utah, the Xinminpu Group of Gansu Province in China, the Prince Creek Formation off the North Slope of Alaska, and the Triassic-Jurassic Moenave Formation of southern Utah.

She primarily focuses on using trace element and stable isotope geochemistry of fossil vertebrates and invertebrates to understand paleoecology, paleoclimatology, and taphonomy of ancient terrestrial ecosystems. Suarez is particularly interested in past greenhouse climates and major climate shifts such as the mid-Cretaceous thermal maximum and the end Triassic extinction. She also uses carbon isotope chemostratigraphy to identify major global C-cycle shifts in Earth's deep-time history.

"My research aims to characterize the occurrence of large scale fluxes of carbon into the atmosphere by identifying the hallmark of rift eruptions, a large negative carbon isotope excursion in the rock and fossil record and associating it with the occurrence of extinction on land," said Suarez, a native of San Antonio, Texas who joined the University of Arkansas in 2012. "This study to some extent is an experiment that tests what can happen given large-scale carbon flux into the atmosphere."

Suarez has published multiple peer-reviewed articles and presented at numerous conferences. Additionally, in 2004, Suarez and her identical twin sister, Marina, had a new dinosaur from the Cedar Mountain Formation of Utah named after them for discovering the site it came from; it is called Geminiraptor suarezarum.

About the American Geosciences Institute: The American Geosciences Institute is a nonprofit federation of geoscientific and professional associations that represents more than 250,000 geologists, geophysicists and other earth scientists. Founded in 1948, AGI provides information services to geoscientists, serves as a voice of shared interests in the profession, plays a major role in strengthening geoscience education, and strives to increase public awareness of the vital role the geosciences play in society's use of resources, resiliency to natural hazards, and interaction with the environment.