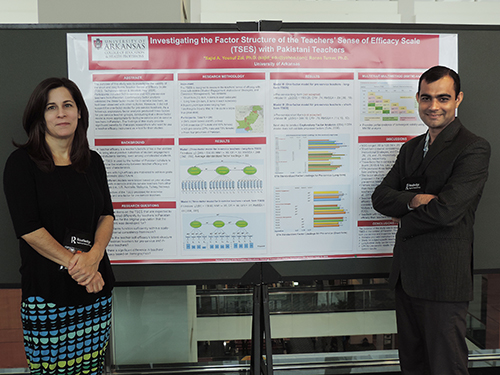 Sajid Ali Yousuf Zai will return to his home country of Pakistan this month with a doctorate from the University of Arkansas and a long list of publications about his research that will assist other education scholars.

Yousuf Zai will graduate May 14 with a Doctor of Philosophy degree in educational statistics and research methods from the College of Education and Health Professions. Since 2012, he has published 10 research articles, including two this year and has two more under review, and since 2014, he has completed 11 conference publications, including six this year.

He recently returned from Washington, D.C., where he presented a paper based on his dissertation at the American Educational Research Association national meeting. The paper, "Investigating the Factor Structure of the Teachers' Sense of Efficacy Scale (TSES) with Pakistani Teachers" was co-written with Ronna Turner, an associate professor who serves as his faculty adviser.

"Self-efficacy refers to a teacher's ability or belief that he can do better if the situation is not in his favor," Yousuf Zai said. "This could be when a student is unmotivated or hard to teach, a situation that can occur in any country."

Yousuf Zai took an instrument used to measure self-efficacy of teachers that was developed in the United States and conducted research to determine whether it would produce valid results when used with teachers in Pakistan. He conducted research to validate both the long and short forms of the survey instrument. He also translated it into Urdu, which is the national language of Pakistan, although English is the official language primarily used in business and government.

Results of his study suggest the instrument functions as hypothesized for Pakistani in-service and pre-service teachers and can now be used by scholars in Pakistan with confidence, Yousuf Zai said.

"Researchers were using this instrument in Pakistan, but the results were questionable without proper validation," he said. "They couldn't be sure if the results came from efficacy or culture."

Scoring high on the self-efficacy measure may indicate that a teacher will perform well in the classroom given that there is a positive relationship between teaching self-efficacy and student performance, he said.  Thus, having access to this instrument that has been tested with a large sample of teachers across Pakistan may be valuable to their teacher education community.

His research on the self-efficacy instrument and his work with other researchers has been published in international journals including Advances in Social Sciences Research Journal, International Journal on New Trends in Education and Their Implications, The Sindh University Journal of Education and Educational Media International.

Yousuf Zai will return to Pakistan shortly after the U of A commencement. He is seeking a position at a university in Peshawar. His doctoral program is funded by the U.S. Agency for International Development, under the Training for Pakistan Project, which is implemented by World Learning, a nonprofit organization.

While at the U of A, he taught the Statistics in Nursing class and assisted graduate students with research design, data analysis and interpretations of their research outcomes. He also provides research consultancy services to other scholars.

He was deputy headmaster of a boy's school in Islamabad before coming to the United States. He is also a former participant, and now a consultant, for the Teaching Excellence and Achievement Pakistan Project sponsored by the International Research and Exchange Board through the U.S. Department of State.

Turner indicated that Yousuf Zai is applying to institutions of higher education in Pakistan, and she expects him to contribute significantly to diverse areas of research in his home country, including in the fields of applied statistics, teacher education, and the health sciences.

"I believe he will be a proud representative of the University of Arkansas in his home country and will contribute greatly to education and research in his future endeavors," Turner said.