U of A Graduate, Graduate Student Honored at Arkansas Historical Association Conference 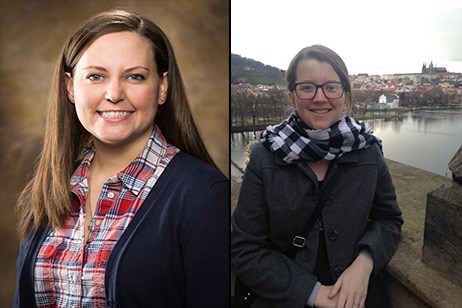 FAYETTEVILLE, Ark. – A University of Arkansas graduate and a current U of A graduate student were honored for their scholarly work at the 75th annual conference of the Arkansas Historical Association.

Rebecca Howard, who earned a doctorate in December, and Chelsea Hodge, a doctoral student in history, received awards at the association’s awards banquet, held April 23 in Little Rock.

Howard received the James L. Foster and Billy W. Beason Award “for her outstanding contribution to Arkansas history” with her dissertation, “Civil War Unionists and their Legacy in the Arkansas Ozarks.” The award came with a certificate and $250.

Hodge earned a bachelor’s degree in music performance and German in 2012 and a master’s in history in 2014 – both at the U of A. She received the Susie Pryor Award in Arkansas Women’s History “for the best unpublished essay on Arkansas women’s history” for her essay, “The Coal Operator’s Daughter: Folklore and Labor Activism in the Upland South.” The award, presented by the Arkansas Women’s History Institute, came with a certificate and $1,000.