Studies Suggest Frequency of Urination May Be Used to Judge Hydration 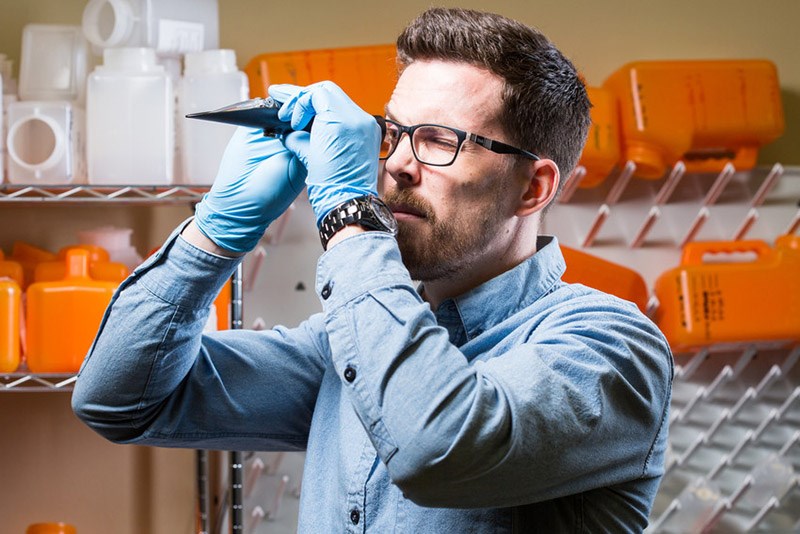 Matt Tucker, a doctoral student in exercise science, uses a refractometer to measure the specific gravity of urine for an indication of whether the subject is dehydrated.

FAYETTEVILLE, Ark. – Does the number of times you visit the bathroom each day tell you whether your body is adequately hydrated?

University of Arkansas faculty and students in the exercise science program conduct research in the Human Performance Laboratory on many aspects of hydration, including this question.

Hydration is a way to describe the total body water level in the body. Dehydration means there is too little body water for optimal health; euhydration is just enough, explained Matt Ganio, an associate professor who directs the lab in the Health, Physical Education and Recreation Building. The lab is part of the College of Education and Health Professions.

“We typically access hydration status using blood and urine measures, but other cues, like thirst, help individuals know their level of hydration,” Ganio said. “Thirst, however, is not very sensitive.”

Ganio recently became a Fellow of the American College of Sports Medicine. The fellowship recognizes distinguished professional achievement in research or service in exercise science and sports medicine and encourages continued leadership.

Chronic, everyday dehydration has been linked to kidney stones, constipation, colorectal cancer, precancerous polyps and bladder cancer, medical conditions that affect more than 63 million Americans. Even short-term dehydration can lead to temporary problems with cognitive skills, including an impaired ability to focus on tasks, and may lead to mood swings.

According to U.S. statistics, medical issues linked to chronic dehydration cost the U.S. health care system more than half a billion dollars a year.

“Clearly, finding new ways to track and improve hydration can have an economic and health impact,” Ganio said. “It is too difficult to recommend a daily amount of fluid that everyone should ingest, and individual needs change on a daily basis. Even if we had an ‘accurate’ amount, it is very impractical for an individual to measure and track how much fluid they are taking in each day.”

The kidneys filter blood, but they are also important in regulating body water, Ganio said.

“If you drink too little, and become dehydrated, your kidneys make your body conserve water,” he said. “They do this by reducing the amount of urine that is formed. And also the reverse; if you drink too much fluid, your kidneys sense that and form more urine, which is mostly water, so that you urinate out excess water. Given this known process, we scientifically have shown that, yes, the more fluid you take in and thus the more hydrated you are, the more you will urinate. If you are dehydrated, you urinate less frequently.”

Matt Tucker is scheduled to graduate in May with a doctorate in kinesiology. He is first author of an article published recently in the European Journal of Clinical Nutrition that explains results of lab trials conducted in 2014 by Melina Gonzalez, an Honors College student who graduated in 2014 with a bachelor’s degree in kinesiology.

Gonzalez recruited subjects who underwent three trials in each condition – either dehydrated or well-hydrated, referred to as euhydrated in the research literature. Her research examined whether the results of a previous study by another exercise science student, Jenna Burchfield, would be reliable on repeated occasions. Burchfield conducted a study on the idea of using the number of times a person urinates within a 24-hour period as an indication of hydration status.

Burchfield, who graduated with a master’s degree in kinesiology last May, also published her research in the European Journal of Clinical Nutrition. With her testing, she observed that well-hydrated individuals urinated an average of five times over 24 hours, while those who were dehydrated urinated only an average of three times. Each of the subjects in her research underwent one trial in which one group of people was required to restrict fluid intake and the other group was allowed to drink as much as desired.

“It seems obvious but no one had quantified the relationship before,” Tucker said. “We are looking for a user-friendly indicator of hydration status that can tell people if they are meeting their daily fluid intake needs.”

However, there will still be differences between individuals based on several factors, including physical activity and general health. These first two studies have examined only healthy college-aged men and women. Ultimately, using the number of times a person urinates to indicate hydration status may fall into a range, Tucker said.

About the Human Performance Laboratory: The Human Performance Laboratory is a student-centered facility with a unique dual purpose that includes research and educational components. Its mission is to serve as a multidisciplinary unit for the initiation and conducting of research focusing upon health, exercise, and performance, to provide educational outreach programs for targeted groups with an emphasis on collaborative and cooperative programs with agencies in the state and region, to provide additional educational experiences for our undergraduate and graduate students in exercise science, and to emphasize collaborative and cooperative approaches to research and programming. To see all the research going on in the lab, view this short video.