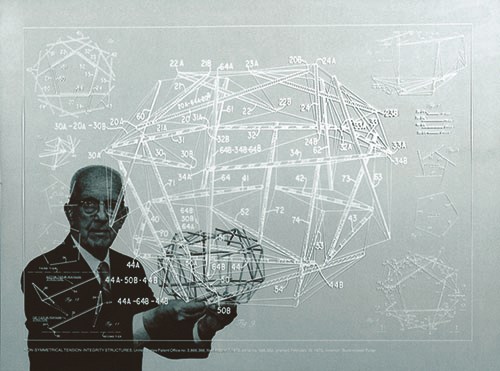 FAYETTEVILLE, Ark. — "Inventing Fuller," an exhibition exploring the work of Buckminster Fuller "inventor" through models, drawings and sketches, is on display through March 18 in the Fred and Mary Smith Exhibition Gallery, in Vol Walker Hall, on the University of Arkansas campus in Fayetteville. It is presented by the Fay Jones School of Architecture and Design.

As part of this exhibition, Peter Raven, botanist, environmentalist and president emeritus of the Missouri Botanical Garden, will present a lecture at 5 p.m. Feb. 29 in Ken and Linda Sue Shollmier Hall in Vol Walker Hall. Raven, who frequently speaks on biodiversity and species conservation, received the International Prize for Biology, Volvo Environment Prize, Tyler Prize for Environmental Achievement and International Cosmos Prize.

Admission for Raven's lecture is free, with limited seating. An opening reception for the exhibition will be held Feb. 29 following the lecture.

This exhibition aims to position the work of Buckminster Fuller the inventor in the context of 20th century technology including his regional context to show the diversity of Fuller's design across multiple disciplines, said Winifred E. Newman, head of the Department of Architecture, who is also curator for this exhibition.

Looking at Fuller's inventions across disciplines and in the context of the Midwest repositions one of the key figures in the 20th century debates on technology, the arts, environment and engineering as a foundational figure in our own intellectual and physical environment, she said.

Fuller spent time in the Midwest, and his work influenced mid-century modern architects, designers, product designers, engineers and others, she said. Fuller's first visit to the Midwest was a presentation of the 4D House to the annual American Institute of Architects in 1928. He traveled throughout the Midwest in the summer of 1940, and he accepted a research professorship at Southern Illinois University, Carbondale, from 1959 to 1972. His influence in the region is felt in industry through his collaborations with Butler Manufacturing Company of Kansas City, the Ford Motor Company in Dearborn, Michigan, and the Old Man River project, a low-cost housing proposal for East Saint Louis, Illinois.

Fuller defines design as the ordering of components, Newman said. His premise assumes that systems thinking can and should be applied across a constellation of problems inscribed within Universe, or "the aggregate of all humanity's consciously apprehended and communicated non-simultaneous and only partially overlapping experiences." Design science looks to Universe for models of and directions for successful invention.

The Fay Jones School, for example, is constituted by three particular disciplines — architecture, interior design and landscape architecture — that together describe the gamut of knowledge in design science that look at the systems, processes and components of environments.

"'Inventing Fuller' underscores the role that Fuller plays as an anticipatory figure in 21st century problems, a core figure in an intellectual history of invention and a lens through which we can examine the way 20th century design science — as Fuller would characterize it — managed the transition from the age of the machine to the age of information," Newman said. "Fuller saw himself as part of an 'emerging synthesis of artists, inventors, mechanics, objective economists and evolutionary strategists.' Consequently, his intellectual and objects output defies classification, yet shines a penetrating light on the world of specialization that he saw as the end game of the scientific revolution. Much as the humanists in the Renaissance, Fuller believed that human beings must participate in discerning the truths (general principles) of Universe and enact the design of their own development. We design — or evolve — the world that we inhabit."

The content of the exhibition includes three-dimensional models, drawings, sketches, prints and videos augmenting the context of the main themes of Fuller's definition of design. In addition, this exhibition uses augmented reality technologies to enhance the experience for participants.

The focus of the exhibition work is the portfolio "Inventions: Twelve Around One (1981)," which includes 13 framed prints and framed text pages describing a series of Fuller's inventions. Fuller prepared the images for the Carl Solway Gallery in Cincinnati, Ohio, to exemplify the scope of work spanning his career.

Three pieces of archival material — "Unpainted Sphere with Movable Parts," "Sphere Painted Red, Blue, and Yellow" and "Sphere Painted Orange and Red" — have been provided to the exhibition by Crystal Bridges Museum of American Art, in Bentonville, Arkansas.

The furniture in the first section of the gallery is provided by Lacuna Modern Interiors of Fayetteville.