Libraries and Walton College Team Up for Popular Reading Initiative 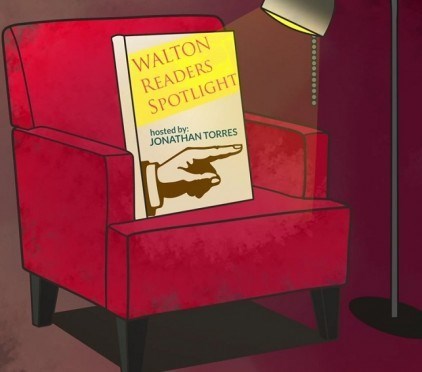 A still from the opening animation of the Walton Readers Spotlight, a series that engages viewers and urges readers to begin conversations about books that inspire or intrigue them.

On the Walton Readers Spotlight, business librarian Jonathan Torres interviews Sam M. Walton College of Business faculty and staff about books that have inspired them. The program is part of a reading initiative began last summer in coordination with the college's associate dean, Anne O'Leary Kelly.

Inspired by the reading initiative, Torres conducted the series of interviews in order to "promote intellectual growth and empowerment through literature," he said.

The production team began interviewing last fall and each interview takes only five to ten minutes. The episodes are edited and broadcast across Walton College's displays each day.

"I think the reading initiative is a great way for the college to generate conversation. Seeing Dan Harris and Raja Kali, in the hall , I've been able to stop them and ask them more about their books, and I've put them on my own personal reading list," said JR Hinkson, academic advisor and one of the interviewees.

Hinkson recommended The People's Tycoon: Henry Ford and the American Century by historian Steven Watts. Watch the video to find out why he chose this title, or learn more about Hinkson's pick through the Libraries' catalog.

"In the college we have an enormous diversity of backgrounds and skills - the recommendations that come from the Walton Readers Spotlight have all been fascinating," Hinkson said.  "I wanted simply to contribute to the overall conversation as much as I could, and it was a blast."

Along with Hinkson, Torres has interviewed Dean Matt Waller, Jon Johnson, Dan Harris, Raja Kali, and Allan Ellstrand. Ellstrand is the most recent interviewee and he discussed The Signal and the Noise: Why So Many Predictions Fail-but Some Don't by Nate Silver. All of the titles recommended by WCOB faculty and staff are purchased for the Libraries' collection, and can be found through the catalog.

The show has proven so popular that Torres continues to be contacted by faculty members volunteering to give their picks.  Jim Goodlander is the director of the video series, and Torres says that together they are developing innovative concepts for upcoming spring 2016 episodes.

In addition to being broadcast throughout WCOB, the entire series is available through Walton's YouTube channel. Contact Jonathan Torres for additional information.