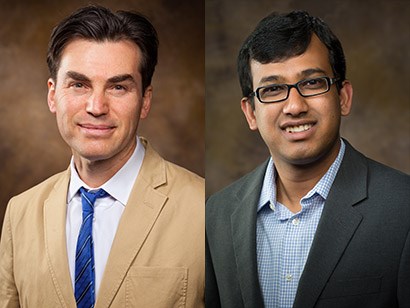 FAYETTEVILLE, Ark. – An international group of physicists led by the University of Arkansas has created an artificial material with a structure comparable to graphene.

“We’ve basically created the first artificial graphene-like structure with transition metal atoms in place of carbon atoms,” said Jak Chakhalian, professor of physics and director of the Artificial Quantum Materials Laboratory at the U of A.

In 2014, Chakhalian was selected as a quantum materials investigator for the Gordon and Betty Moore Foundation. His selection came with a $1.8 million grant, a portion of which funded the study.

Graphene, discovered in 2004, is a one-atom-thick sheet of graphite. Graphene transistors are predicted to be substantially faster and more heat tolerant than today’s silicon transistors and may result in more efficient computers and the next-generation of flexible electronics. Its discoverers were awarded the Nobel Prize in physics in 2010.

The U of A-led group published its findings this week in Physical Review Letters, the journal of the American Physical Society, in a paper titled “Mott Electrons in an Artificial Graphene-like Crystal of Rare Earth Nickelate.”

“This discovery gives us the ability to create graphene-like structures for many other elements,” said Srimanta Middey, a postdoctoral research associate at the U of A who led the study.

Additional members of the group were David Doennig of the University of Munich, Rossitza Pentcheva of the University of Duisburg-Essen in Germany, Zhenzhong Yang, Jinan Shi and Lin Gu of the Chinese Academy of Sciences; and John W. Freeland and Phillip Ryan of the Advanced Photon Source at Argonne National Laboratory near Chicago.

The research was also partially funded by the Chinese Academy of Sciences.