Eric Boles Selected as Director of Office for Sustainability 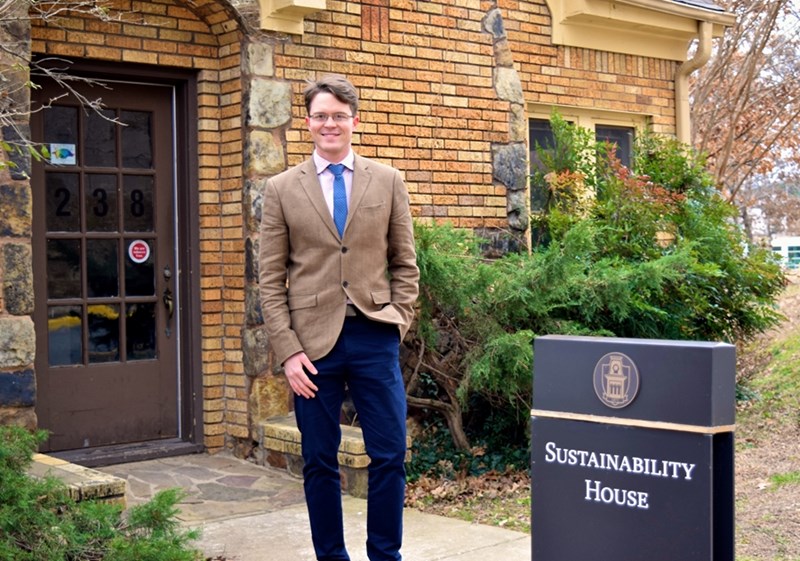 Eric Boles joined the Office for Sustainability as the new director in mid-December.

The Office for Sustainability is ringing in the New Year with a new director. Eric Boles, a U of A graduate from Bentonville, has taken over this position and has hit the ground running by leading strategies to achieve the U of A's ambitious goals to be a zero waste campus by 2021 and climate neutral by 2040. Boles says his focus will be to continue to engage the campus stakeholders to ensure they are informed and motivated about the U of A becoming a green campus.

"I am excited to get more students involved in all the great programs and events that the OFS provides," Boles said. "At the end of the day, we are in the business of higher education and I hope to implement more programs with a focus on the science of sustainability. Too often sustainability is considered to be an altruistic endeavor while the modern reality is that sustainability is more of a requirement than a luxury."

Boles received both his undergraduate and masters degree in Biological Engineering from the U of A and has been involved in a number of projects that have focused on sustainability and the preservation of natural resources. These projects include assisting the National Pork Board to make informed decisions regarding water use in pork production, a hot topic following the debate over the hog farm built by the Buffalo National River. Boles also co-founded a company, Paradigm Sustainability Solutions, that focuses on assisting organizations with sustainability planning, reporting, and stakeholder engagement. Boles says he is impressed with the work the university has already done to minimize waste, but there are still a lot of challenges to face.

"Setting a goal and starting the conversation is a big first step, but there is still a lot that will need to be done to meet that goal," Boles said. "We have a new program director, Michael Repovich, who is focused on developing the tools to meet this goal. We already have a recycling program in place that will be expanded through infrastructure improvements and an educational campaign. We also have a robust energy conservation program on campus, and are well ahead of our interim benchmarks for reducing greenhouse gas emissions. Moving to completion of these goals is both a challenge and an opportunity."

When asked about his biggest concerns for the upcoming years, Boles replied that he was most focused on not leaving people out of the effort. "I want the University of Arkansas to be on the leading edge of sustainability initiatives, but I want to be careful not to alienate students, staff, or faculty who are not yet on board," he said. "Meeting our goals is going to take a group effort, and the Office for Sustainability needs to continue to be a leader in open collaboration and civil discourse."

Boles himself lives a very sustainable lifestyle, including riding a bicycle almost exclusively all year, which he says is not for everyone, but he enjoys the fresh air and the money he saves. Boles also expressed his passion for minimizing food waste

"About 40 percent of all food produced in this country goes uneaten, so I have challenged myself to keep food waste in own my kitchen to an absolute minimum," he said.

Boles says the most exciting part of this new opportunity is getting the chance to work closely with the talented and passionate professionals that have already set the stage for sustainability on campus. He also said that if he could leave any legacy with the U of A, it would be one of inclusion and common sense.

"Sustainability shouldn't be an isolated, altruistic effort on the part of the University of Arkansas," Boles said. "We live in a world with limited resources, and sustainability is a common sense approach to ensuring that the next generation can provide for itself. In the past this work has been characterized as part of a fringe movement, so I would like to see sustainability integrated into mainstream thinking."

For more information on U of A sustainability programs and what you can do to help, please stop by the Office for Sustainability for a chat or contact them at sustain@uark.edu.