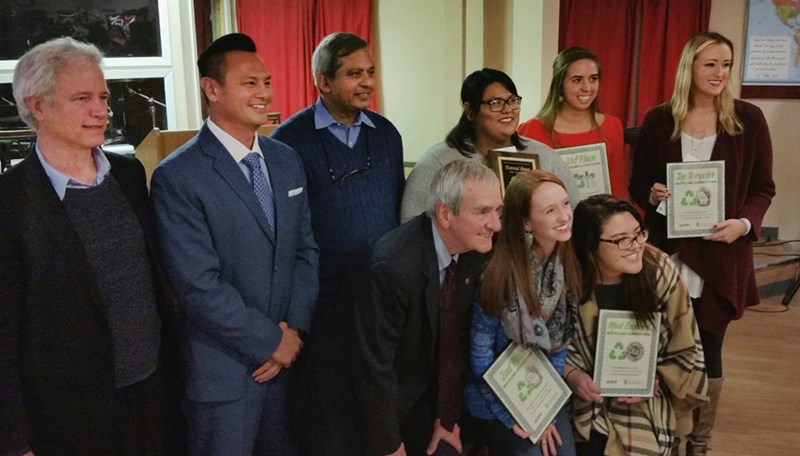 Interim Chancellor Dan Ferritor, Provost Ashok Saxena, Daniel Hazman of Gamer 4 Good, and Michael Repovich of the Office for Sustainability present certificates to U of A students for top recycling awards in a pilot program that promotes recycling.

FAYETTEVILLE, Ark. – The University of Arkansas took a big step toward its goal of becoming a zero-waste campus this week with the completion of two campus recycling competitions. The U of A Office for Sustainability, in collaboration with Gamer 4 Good, hosted the first Recycling Award Ceremony on Monday, Nov. 30, to recognize the recycling efforts of participating students and Greek houses. Interim Chancellor Dan Ferritor and Provost Ashok Saxena presented awards to the winners.

The two-week long competition was between eight Greek Houses and one RSO on the U of A campus and focused on gamifying and providing incentive for students to recycle on campus and at home.

The ceremony was held at Chi Alpha Ministries, the first-place winner of the competition. Chi Alpha won the Greenest House on Campus Award after collecting 952 pounds of recyclable material in just two weeks. The second-place award went to the Kappa Delta House, and third place went to the Kappa Kappa Gamma House. The Top Recycler Award went to Tyler Platt (Kappa Delta) after she collected an impressive 42 pounds of aluminum cans. The Most Engaged Student Award went to Maria Cueva (Chi Alpha), who admitted that she and her friends frequently went dumpster diving around town to increase her score.

"I'm naturally a competitive person," Cueva said, "If I saw that my score was dropping I would invite my friends out to lunch and then trick them into going dumpster diving with me after. It was actually really fun and it was even more fun because we were helping the world."

Daniel Hazman, CEO of Gamer 4 Good  (G4G) and lead collaborator on the G4G Recycling Project, said in his address to the crowd that he was delightfully impressed by the effort these houses put towards succeeding in this project.

"In ten days these 120 students recycled more than the average student does in two years," Hazman said, "That's outstanding!"

The project was the result of collaboration between G4G and the Office for Sustainability and was sponsored by many different local businesses and organizations to educate and encourage houses on campus to recycle.

"We needed to reinvent recycling and make it more exciting and fun," Hazman said.

The University of Arkansas has made a commitment to be a zero waste campus by 2021, which means that in the next five years the campus will need to be diverting 90 percent of our 3,000 metric tons of waste annually from landfills. Marty Matlock, executive director of the Office for Sustainability, said after seeing the success of this project that through teamwork this goal could be achieved even sooner.

In his presentation of the Greenest House on Campus Award, interim Chancellor Ferritor said he was looking forward to watching the progress that the campus would make over the next five years.

"This isn't about saving money," Ferritor said, "It's cheaper to throw it in a hole in the ground. This is about choosing a better way."

According to Ferritor, the students and their houses who participated in this challenge have helped us to better understand how we can motivate positive change with information, connectivity, and a few simple rewards. When asked about what they would take away from the competition, all the students were unanimous in their conviction to continue recycling and spreading the word to others. Lezlie Flores, the student representative for Chi Alpha, said she and her team were surprised by how much they learned.

"For us it was seeing how much we had collected and if we hadn't done that all of it would have gone to waste," Flores said. "A small group can do so much and it was really fun seeing that."

Maria Cueva, winner of the Most Engaged Student Award, said she was excited to see what else could be achieved on campus.

"If just a hundred or so students can make such a difference, how amazing would it be if the whole university joined us," Cueva said.

For more information on what you can do to help the U of A achieve its Zero Waste Goal, visit the Office for Sustainability website at sustainability.uark.edu.