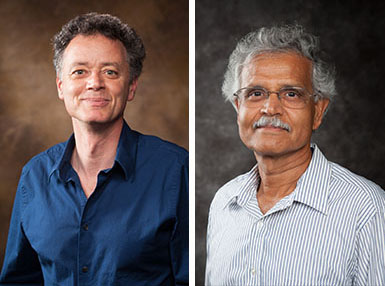 FAYETTEVILLE, Ark. – An international group of physicists has traced the origin of an electromagnetic interaction to the Dirac equation, a fundamental equation of quantum physics.

The interaction couples the spin of the electron to the angular momentum of the electromagnetic field and it is responsible for a variety of phenomena in a large class of technologically important materials. University of Arkansas researchers proposed the interaction in 2013.

In addition to charge, electrons have spin. By understanding and using the different states achieved when an electron's spin rotates, researchers could potentially increase information storage capacity in computers, for example.

The new finding, published as a rapid communication in the journal Physical Review B, advances the fundamental understanding of magnetic systems as well as multiferroics, which can change their electrical polarization when in a magnetic field or magnetic properties when in an electric field. The rapid communications section of Physical Review B, a journal of the American Physical Society, is devoted to the accelerated publication of especially important new results.

“Through this interaction, magnetic moments can generate an electric polarization and an electric polarization can generate a magnetic texture in multiferroics,” said Laurent Bellaiche, Distinguished Professor of physics at the University of Arkansas. “This provides another handle on how material properties can be tuned or controlled for practical applications in devices based on electrical and magnetic properties.”

Surendra Singh, professor of physics, and Bellaiche were part of the U of A team that proposed in 2013 that the angular momentum of an electromagnetic field can directly couple to the spin of an electron to produce a physical energy. This direct coupling explains known, subtle phenomena in magnetoelectric materials and predicts effects that have not yet been experimentally observed.

The results were obtained through a collaborative effort with two other groups – Ritwik Mondal, Marco Berritta and Peter M. Oppeneer at Uppsala University in Sweden and Charles Paillard and Brahim Dkhil at Ecole Centrale of Paris in France.

The U.S. Department of Energy and French National Research Agency funded the research.