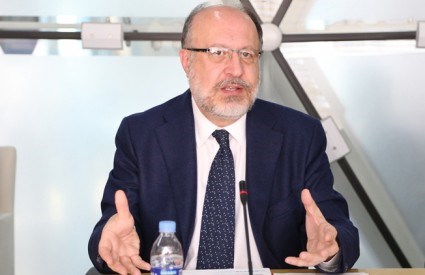 Joseph A. Kéchichian, senior fellow at the King Faisal Center for Research and Islamic Studies in Riyadh, Saudi Arabia, will deliver a lecture on his newly published book 'Iffat al Thunayan: An Arabian Queen (Sussex Academic Press 2015).  Based on multiple interviews conducted with members of the al-Faysal family, friends, and acquaintances of the late queen, 'Iffat al Thunayan: An Arabian Queen is the first political biography of a Sa'udi monarch's spouse.

The lecture will take place at 3 p.m. Friday, Oct. 9, in the Hembree Auditorium, AFLS 107-E, and will be followed by a book-signing. This event is free and open to the public.

'Iffat Al Thunayan, spouse of the late King Faysal bin 'Abdul 'Aziz Al Sa'ud (r. 1964-1975), was a pillar of the ruling Al Sa'ud family. Born and raised in Istanbul to an uprooted Sa'udi family, she returned to the Kingdom in 1932, a few months before the founder ruler, 'Abdul 'Aziz bin 'Abdul Rahman, reinstituted the monarchy. A politically conscious spouse, Queen 'Iffat played the leading role in Sa'udi female society, attended many state functions, and received female state guests. She traveled extensively, especially in Europe and the United States, supported myriad charities, and cajoled many to invest in the Kingdom.

Kéchichian is a political scientist and senior fellow at the King Faisal Center for Research and Islamic Studies, as well as the CEO of Kéchichian & Associates LLC, a consulting partnership that provides analysis on the Arabian/Persian Gulf region, specializing in the domestic and regional concerns of Bahrain, Iran, Iraq, Kuwait, Oman, Qatar, Saudi Arabia, the United Arab Emirates and the Yemen. He is also a senior writer with the Dubai-based Gulf News, the top-ranked English-language news daily in the United Arab Emirates, and a regular interviewee on radio and television programs.

Kéchichian received a doctorate in foreign affairs from the University of Virginia in 1985, where he also served as the assistant dean in International Studies (1988-1989), in addition to holding numerous fellowships and teaching positions at other institutions. Kéchichian is a frequent participant in conferences throughout the world and delivers frequent lectures to leading think-tanks and political institutions.  Among his publications are Oman and the World: The Emergence of an Independent Foreign Policy (RAND 1995), Iran, Iraq, and the Arab Gulf States (Palgrave 2001), Political Participation and Stability in the Sultanate of Oman (Gulf Research Center 2005), and edited volume A Century in Thirty Years:  Shaykh Zayed and the United Arab Emirates (The Middle East Policy Council 2000), in addition to numerous articles and essays.