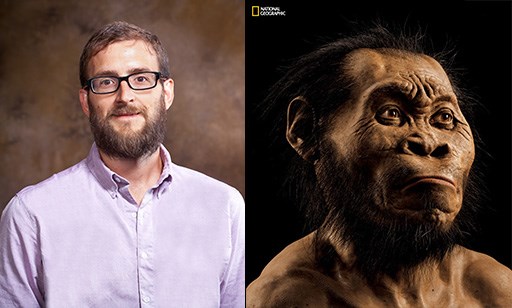 FAYETTEVILLE, Ark. – A University of Arkansas biological anthropologist is part of the international team of scientists who verified that fossils found in a South African cave belong to a new species of human ancestor.

The National Geographic Society and the University of Witwatersrand in Johannesburg, South Africa, announced the discovery of the new species — Homo naledi – on Thursday, Sept. 10. The U of A has a partnership with Wits University and researchers here have been working on the project since the fossils were found in 2013.

Over the last two years, Lucas Delezene, assistant professor of anthropology in the J. William Fulbright College of Arts and Sciences and expert on hominin dental anatomy, compared known hominid teeth to the newly discovered fossils to determine if they represent a new scientific discovery.

“I spent the last two summers looking at every fossil tooth I could get my hands on, and the new South African fossils don’t match anything,” Delezene said. “We can find things that are similar, but nothing quite matches.”

Delezene said the conclusions of the dental analysis matched the results from teams that analyzed other anatomical regions of the fossils like the feet, hands, and heads.

“We were all in agreement that the fossils are different than anything found previously,” he said.

The discovery was made by Lee Berger, research professor at Wits University and a National Geographic Explorer-in-Residence. Berger’s parents are U of A alumni and he is a former adjunct archaeology professor.

Delezene and the other researchers who validated the find coauthored one of two papers on the discovery in the journal eLife. The other paper focuses on the geology and location of the find. Delezene and the analysis team are working on a suite of more detailed articles about the new species as their research continues.

The work on Homo naledi continues. Delezene and Peter Ungar, Distinguished Professor of anthropology chair of the Department of Anthropology at the U of A and visiting professorial fellow at Wits University, will work on reconstructing the diet through dental microwear as the project moves forward.

Delezene and collaborators have developed 3-D models from CT scans of the teeth that will allow them to determine precise differences between these teeth and previous findings. They will also explore how the new species fits into the broader scheme of human evolution.

Other scientists will work on determining when Homo naledi lived, and there is considerably more excavation to do at the cave. While this is one of the largest fossil hominin finds to date in Africa, only a small fraction of the fossils have been removed from the site.

“There will be decades worth of work on that cave,” Delezene said.