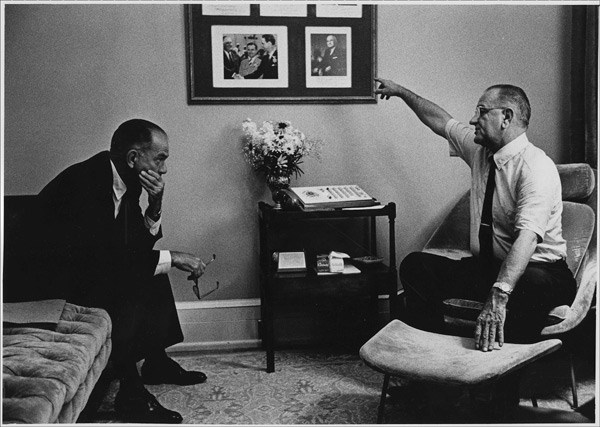 FAYETTEVILLE, Ark. — The J. William Fulbright College of Arts and Sciences and the Diane D. Blair Center of Southern Politics and Society will host 17 scholars from around the world Sept. 1-2 for the "J. William Fulbright in International Perspective: Liberal Internationalism and U.S. Global Influence" conference. During the two-day meeting, participants will discuss Fulbright's foreign policy legacy. This is the sixth symposium in the Blair Legacy Series.

The Blair Legacy Series invites senior scholars to assess the regional, national and international impact of politicians, intellectuals and social leaders. Participants in previous conferences have produced four manuscripts and a fifth is in production.

While the conference itself will include only the participants and organizers, the public is invited to two free forums associated with the meeting.

Randall Woods, noted Fulbright biographer and the John A. Cooper Distinguished Professor of History, will welcome the scholars during an opening event at 5:30 p.m. Monday, Aug. 31, in Old Main's Giffels Auditorium.

Tom Healy, former chair and current member of the Fulbright Foreign Scholarship Board, will conduct an essay-writing workshop from 9 a.m. to noon Tuesday, Sept. 1, at the Blair Library Building, home of the Fayetteville Public Library.

Brogi's research focuses on U.S. strategic and cultural relations with Western Europe during the Cold War. His latest book, Confronting America: The Cold War between the United States and the Communists in France and Italy (University of North Carolina Press, 2011), analyzes left-wing anti-Americanism in France and Italy during the Cold War, and U.S. reactions and strategies to stop the advance of communism in both countries. It was awarded the biennial Charles Smith prize by the Southern Historical Society. Brogi is currently working on an interpretive work on US-Italian relations from World War II to the present.

He has held a senior fellowship at the Nobel Peace Institute at Oslo, Norway. He also served as lecturer and John Olin Fellow in International Security Studies from Yale University, and as a visiting professor at Johns Hopkins University's School of Advanced International Studies, Bologna Center, Bologna, Italy. A native of Florence, Italy, Brogi has resided in the United States since 1990.

Scott-Smith's research interests involve an exploration of the 'Transnational Transatlantic' - tracking the governmental and non-governmental linkages that have bound North America and Europe since World War II - which has expanded to include the connections between ideas, ideology and power, the 'cultural Cold War', U.S. foreign policy, the Atlantic Community, public diplomacy, intelligence history, and the role of private individuals and institutions in transatlantic relations.

He has served as an associate professor and oversaw the international relations track at Utrecht University's Roosevelt Academy,the Netherlands.

Scott-Smith is the Ernst van der Beugel Chair of Diplomatic History of Atlantic Cooperation since World War II at the University of Leiden, the Netherlands, and a senior fellow with the Roosevelt Study Center, Middelburg, Netherlands. He received a Bachelor of Arts in European and Asian studies from the University of Ulster, Coleraine, Northern Ireland, a Master of Arts in international relations from Sussex University, Brighton, England, and a doctorate in international relations from Lancaster University, England).

Snyder's research focuses on the projection of American power in the international sphere during the early Cold War. He has earned a Fulbright Fellowship to the Netherlands, the W. Stull Holt Dissertation Fellowship of the Society for Historians of American Foreign Relations, and a residential fellowship to the Norwegian Nobel Institute.

He has served on the history department's Warwick Exchange Committee, helping to administer the university's oldest student exchange program. He was given the College of Arts and Sciences Teaching Award for Non-Tenure-Track Instructional Faculty and the Mortar Board Excellence in Teaching Award.

Bettie will present "The Southern Belle Paradox: Fulbright Women in the Global Intellectual Elite." Her research examines the role of educational exchange in U.S. public diplomacy practices, using the Fulbright Program as a case study, which combines policy recommendations and analysis with an updated history of the program.

Brady will present "Thorn in the Flesh or a Dagger in the Heart?: Fulbright, Johnson, and the Failure of Détente." He has served as a Mercatus Center Adam Smith Fellow and was recently named a John E. Rovensky Fellow in U.S. Business or Economic History.

He is a doctoral candidate in history at the University of Virginia. He received his Juris Doctorate from Stanford Law School and was admitted to the Virginia State Bar in 2010.

She is an Honorary Research Associate at La Trobe University and a presenter on Coast Australia, a documentary series about the history of the Australian coastline produced by BBC/History Channel television. She holds a doctorate in history from the University of Melbourne, Australia.

Hart's conference paper, "The Price of Imperial Thinking: J. William Fulbright as Critic of U.S. Empire," complements the research for his book Empire of Ideas: The Origins of Public Diplomacy and the Transformation of U. S. Foreign Policy (Oxford University Press, 2013). His research focuses on mass communications and U. S. foreign relations from the 1930s to the 1950s.

Higgin's most recent research project, under the working title "Selling Racial Progress: Four Washington Agencies and the Struggle for Black Equality, 1949-1969," examines federal agencies such as the United States Agency for International Development, Peace Corps, United States Information Agency, and CU and their efforts to sell America as an example and ally to other nations, with racial equality as core to its values.

She teaches history at Blair Academy, a boarding school in New Jersey. She holds a doctorate in history from the University of Cambridge, England.

Johnson will present "The Fulbright Program in Transition, 1989-2014: From the End of the Cold War to the Obama Administration's Proposed Budget Cuts for FY 2015." Johnson has been the executive director of the Austria-American Educational Commission (Fulbright Commission) in Vienna since 1997 and positions previously served at the Austrian Academic Exchange Service, the Institute for Human Sciences, and the Institute of European Studies Vienna Program (IES Abroad).

He holds a Bachelor of Arts in the humanities from St. John's University, New York City, and a doctorate in philosophy and history from the University of Vienna, Austria.

Konta will present "Making a New Leadership in the Socialist Federal Republic of Yugoslavia: The Impact of the Fulbright Exchange Program in the Light of the American Public Diplomacy Goals from 1964 to 1970." Her teaching and research interests include the American public and cultural diplomacy policies in Cold War Yugoslavia, particularly how the U.S. cultural mission, by shaping soft power policy practices towards Yugoslav leadership and public, influenced the Yugoslav "turn" to the West and the foreign relations with the U.S.

She is a doctoral candidate in the Department of Human Studies at the University of Trieste, Italy, and a teaching assistant at University of Rijeka, Croatia.

Lebovic's conference paper is titled "The National Exceptionalism of Fulbright's Liberal Internationalism." His teaching and research focus on American politics and culture, with particular interests in the histories of media, law, ideas, and international relations.

Prentice will present "J. William Fulbright and the Retreat of American Power: Anglo-Australian Views of Congress and U.S. Neo-Isolationism, 1968-1970." His research employs multi-archival, international research to examine questions related to U.S. foreign policy in the "long 1970s" and the relationship between American motivations and foreign actors' interpretations of these motivations and policies.

Snow's conference presentation, "Cultural Mediation: Fulbright's Legacy for the 21st Century," echoes themes from her 1992 dissertation, "Fulbright Scholars as Cultural Mediators: An Exploratory Study." The paper considers the role of the cultural mediator by examining the communication variables considered important to its enactment and was judged fourth best dissertation in 1992 by the NCA Intercultural/International Communication Division.

Stocker's presentation on "Liberal Critic or Critical Realist? Fulbright and the 1962-3 SFRC Investigation of the Activities of Non-Diplomatic Representatives of Foreign Principals" will build on his 2015 article "Fulbright's Middle East: A Senator's Influence on American Foreign Policy, Digest of Middle East Studies" in DOMES. The piece examines Fulbright's views of and impact on U.S. policy toward the Middle East, particularly the Arab-Israeli conflict. It contributes to the literature on the history of U.S.-Middle East relations and the role of Congress in foreign policy.

Tweraser's presentation, "The 'Operational Code' of Senator Fulbright:  Belief Systems, National Missions, Political Context" shares the name of an article he published in 2012 in the Austrian Journal of Political Science. The article examined the foreign affairs belief system of Senator Fulbright, establishes the role of international education in his belief system, and analyzes the genesis and development of the Fulbright Exchange Program in the constraining context of American governmental and political culture.

He is an author and independent researcher and consultant. He is also professor emeritus of political science at the University of Arkansas where he taught from 1966-1992. He received a doctorate from the School of International Service at the American University, Washington, D.C.

About the Blair Center: Diane D. Blair Center of Southern Politics and Society was established by an act of U. S. Congress in 2001, making it one of the rare research centers in the country to be established by congressional appropriation. It was named in honor of Diane Divers Blair who taught in the Political Science department at the University of Arkansas for thirty years. Her career outside of teaching included extensive public service as chair of both the U. S. Corporation of Public Broadcasting and the Commission on Public Employee Rights. She was also a founding member of the University of Arkansas Press. In 1992, she joined the Clinton presidential campaign as a senior researcher, after which she was appointed a guest scholar at the Brookings Institute. She returned in 1996 as a senior advisor on the Clinton re-election team. Diane D. Blair was a champion of interdisciplinary research and critical thinking, and she reached across the academic aisles often and with ease. The Blair Center reflects her academic model and strives to approach the study of the American South from a variety of angles, attempting to reveal the undercurrents of politics, history, and culture that have shaped the region over time.

Star Lowrey-LaGrone's home in Fort Smith was the first stop on the River Valley leg of the RazorBug Diploma Tour this summer.

A new planning grant will help the U of A become the preeminent university in smart mobility.

In this month's Short Talks from the Hill, Min Zou, professor of mechanical engineering, explains nano-surface engineering and her effort to develop low-friction, lubricant coatings and surfaces for mechanical systems and biomedical implants.

Students gain practical experience in their field of study while the team gets a steady source of reliable, motivated part-time workers.

Participants Needed for a Diet Study

The Department of Food Science and the Center for Human Nutrition are recruiting adults between the ages of 23-65 years to participate in a nutrition study related to time-restricted feeding.