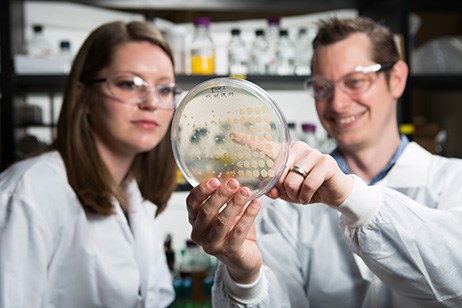 Jeffrey A. Lewis, an assistant professor in the Department of Biological Sciences, was one of 35 faculty members in the nation to win the competitive award. He will use his Ralph E. Powe Junior Faculty Enhancement Award to gain a better understanding of acetylation, a type of modification within cells that may help cells adapt to stress.

Defects in stress defense can damage cells and have been linked to human disorders ranging from cancer to neurodegenerative disease. Better understanding of the process and triggers of acetylation will help researchers better understand cell resiliency.

“Healthy cells rely on a delicate balance of many different and interconnected cellular processes,” Lewis said. “Disruption of any of these processes can lead to catastrophic effects on cellular physiology. Cells must be able to sense and respond to stressful situations that threaten this balance.”

“About 15 percent of all yeast proteins are acetylated, but for the vast majority of proteins we don’t know what that modification is doing,” Lewis said. “This discovery of a vast universe of acetylated proteins has revealed a key gap in our knowledge.”

Rebecca Sides, a cell and molecular biology doctoral student in Lewis’ lab, has found methods to identify and quantify the proteins that change in acetylation during heat stress.

“By identifying proteins whose acetylation state changes during stress, we can come up with testable hypotheses for the function of acetylation,” Lewis said.

The Powe program provides seed funding to enrich the research and professional growth of young researchers and result in new funding opportunities. The Office of the Vice Provost for Research and Economic Development at the U of A is matching the award.