U of A Signs Agreement with Koya University 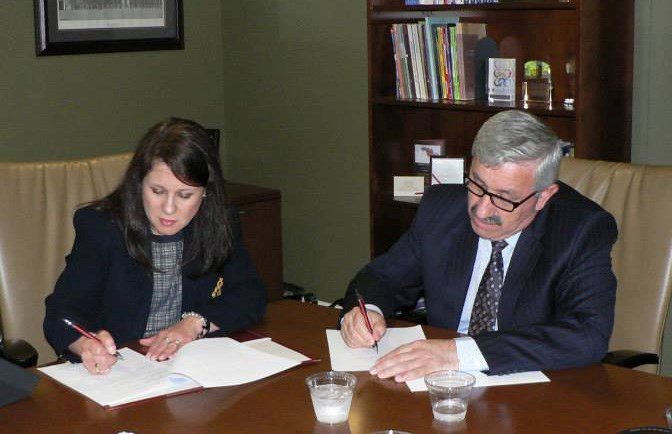 Wali M. Hamad, president of the Koya University, signed the agreement during a visit to the U of A campus earlier this week. He was accompanied by Dilan M. Rostam, vice president for science affairs, and Shwan K. Rachid, dean of the university's College of Science and Health.

"We hope to make a functional, active memorandum of understanding with the University of Arkansas, so our students and faculty can enjoy a fruitful scientific and educational collaboration," Rostam said.

Similar to the previous memorandums of understanding, the agreement with the Koya University calls for the universities to create programs for the exchange of academic, research and other educational materials. It also encourages faculty members and students from each university to visit the other institution for the purpose of lecturing, conducting research or developing academic or administrative skills.

Rostam said they hope to develop strong ties specifically with the Spring International Language Center and the clinical psychology program at the U of A.

Koya University is one of the few universities in Iraq that requires its students to be proficient in English. The university hopes to collaborate with Spring International to open an English language preparatory center in Koya that would be open to students of all Iraqi universities.

Due to the influx of refugees in the country and the traumas caused to segments of the population as a result of the terrorist acts of ISIS, the Iraqi university is highly interested in working with the U of A's clinical psychology department to help address the needs of those affected by these life-changing events.

Additionally, the Koya University plans to join forces with several U of A departments to advance research interests and increase the visibility of both universities in scientific journals. Koya University delegation invited researchers and scientist of UoA to act as Associate editors and peer-reviewers of their scientific journal Aro to bond stronger links for knowledge transfer with the U of A.

The cooperative agreement stemmed from a program directed by the Graduate School and International Education and the graduate program in cell and molecular biology. The program is aimed at growing the population of sponsored students at the U of A. The effort in Iraq has been shepherded by Adnan Al-Rubaye, associate director of cell and molecular biology and instructor of biological sciences, and Gloria Flores Passmore, director of Sponsored Student Programs.

Koya University, which was founded in 2003 and has an enrollment of 5,000 students, has been working toward an agreement with the U of A for nearly 14 months.