'Outcasts United' Picked for One Book, One Community Program at U of A 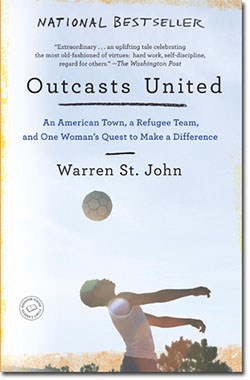 FAYETTEVILLE, Ark. – The University of Arkansas One Book, One Community committee has selected Outcasts United: An American Town, A Refugee Team, and One Woman's Quest to Make a Difference by Warren St. John for this year’s reading program.

The book tells the true story of a refugees from wars in the Middle East and Africa who were re-settled in the small town of Clarkson, Georgia, a new miles outside of Atlanta. The process was as unsettling for the refugees – particularly the teenagers – as it was for the townspeople. For the young men, soccer was a common link – and Outcasts United is about the struggle of a young Muslim woman to build that link into a team, and a league that could bring the Clarkson community together.

“The book is well-written, the story is compelling and the message is very important,” said David Jolliffe, co-chair of the committee. “Outcasts United raises so many important issues that citizens, young and old, in the U.S. should consider:  the responsibility to relocate refugees from the world's danger zones, the attitudes that develop in response to the resulting diversity, and the strength newcomers show as they strive to assimilate into a new culture”

“In several ways this is a perfect choice One Book, One Community,” said Kevin Fitzpatrick, co-chair of the committee. “It’s about a community coming together to deal with change and conflict. Every community in this country faces these kinds of issues, and hopefully reading this book can provide new insights for communities across Northwest Arkansas and the state.”

Warren St. James is a reporter for the New York Times and author of Rammer Jammer Yellow Hammer: A Journey into the Heart of Fan Mania (2004). He will visit the U of A Thursday, Nov. 5, and give a free public lecture on his book at 6:30 p.m. in Hillside Auditorium. He will also speak to Fayetteville Public Library book club members at 11:30 a.m. Friday, Nov. 6.

The book will be suggested reading for all U of A freshmen in the University Perspectives class, and is expected to be a part of other course curriculums as well. Book clubs connected to the Fayetteville Public Library will be reading Outcasts United, and all members of the university and Northwest Arkansas communities are encouraged to read and discuss it.