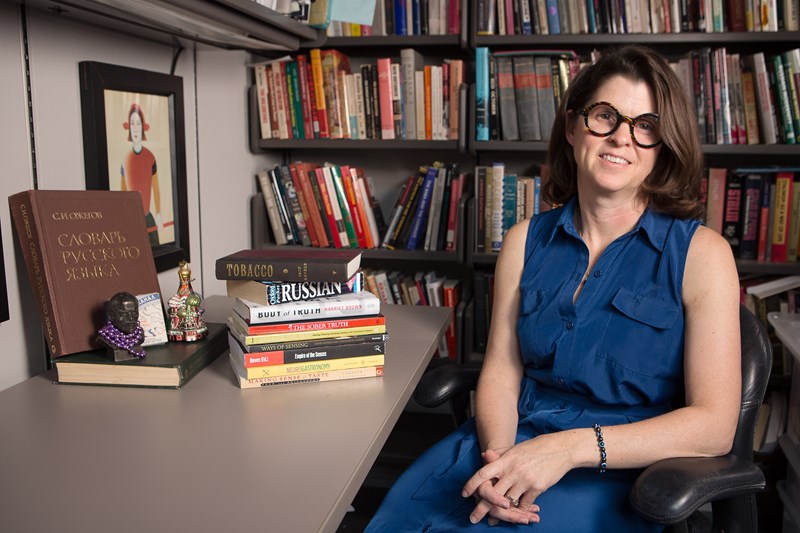 The National Institutes of Health has awarded University of Arkansas historian Tricia Starks a $121,250 grant to continue her research of the history of smoking in Russia.

Trailing only China, Russia is the world’s second-largest cigarette market, with about 60 percent of men and 25 percent of women who smoke.

The Russian government enacted significant anti-tobacco legislation almost two years ago, including indoor smoking bans in most public buildings and launching education campaigns, but many residents push back against the laws.

The resistance doesn’t surprise University of Arkansas historian Tricia Starks, an expert on the history of tobacco use in modern Russia.

“The Soviets were the first government in the world to attempt a national attack on tobacco use in 1920, but they failed,” said Starks, an associate professor of history in the J. William Fulbright College of Arts and Sciences. “The resurrection of anti-tobacco initiatives in the 1970s also collapsed. As a result, Russian smoking is a major public health problem.”

The National Institutes of Health awarded Starks a $121,250 grant to complete the researching and writing of her book, Cigarettes and Soviets: The Culture of Tobacco Use in Modern Russia. The grant came through a program aimed at supporting scholarly works of value to U.S. health professionals, public health officials, biomedical researchers and historians of the health sciences.

About 400,000 Russians die from smoking-related illnesses each year – more than two times the number of smoking-related deaths per capita in the United States. In 2009, the U.S. and Russia created a Bilateral Presidential Commission that coordinated programs between the U.S. Department of Health and Human Services and the Russian Ministry of Health and Social Development.

Smoking cessation in Russia doesn’t have the same cultural buy-in that exists in the United States, Starks said. She hopes her investigation into the past smoking culture of the Soviets – where the state was both producer of and antagonist to tobacco – will give current policy makers a beneficial understanding of the history of Russia’s tobacco problem.

“When Russians first heard that there would be health warnings on their cigarette packs, they were more concerned that the cost was going to go up than if smoking led to cancer,” Starks said.

Tobacco use in Russia is mirrored by the country’s alcohol consumption. The World Health Organization estimates that 20 percent of Russian men die due to alcohol-related causes, compared to about 6 percent of men globally.

“In Russia, the culture is much more accepting of alcohol abuse,” Starks said. “That and smoking are a massive public health problem for the Russians. As a result, Russia is in a prolonged period of negative population growth. In 1991 there were 148 million Russians, but they are projecting that to drop to 109 million by 2050.”

About the J. William Fulbright College of Arts and Sciences: Fulbright College is the largest and most academically diverse unit on campus with 19 departments and 43 academic programs and research centers. The college provides the core curriculum for all University of Arkansas students and is named for J. William Fulbright, former university president and longtime U.S. senator.