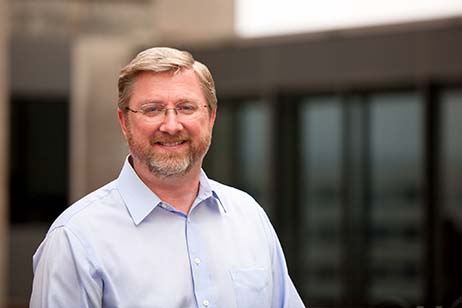 The award honors professors from SEC universities with outstanding records in teaching, research and scholarship. The honorees serve as role models for other faculty and students.

“Alan Mantooth is an outstanding faculty member and we are very pleased that he was selected as the University of Arkansas’ SEC Faculty Achievement Award recipient,” said Sharon Gaber, provost and vice chancellor for academic affairs. “His record of teaching, research and innovation is remarkable.”

SEC Faculty Achievement Award winners, one from each university, receive a $5,000 honorarium and become his or her university’s nominee for the SEC Professor of the Year Award. The SEC Professor of the Year receives an additional $15,000 honorarium and will be recognized at the SEC awards dinner in Destin, Florida, and the SEC Symposium in Atlanta.

In addition to his faculty appointment in the College of Engineering, Mantooth is executive director of the National Center for Reliable Electric Power Transmission (NCREPT), located at the U of A, which he helped found in 2005. The center is the home of a 7,000-square-foot, $5-million power electronic test facility where U of A researchers investigate solid-state solutions for the national electric power grid.

During his tenure at the university, he has overseen $47 million in research funding from the National Aeronautics and Space Administration, the Defense Advanced Research Projects Agency, the Office of Naval Research, Department of Energy, the National Science Foundation and more than 50 companies.

Through the commercial application of his research, Mantooth has been instrumental in the founding and growth of three startup companies in Arkansas. Electronics designed by him and his research team have been used on the International Space Station, in deep well drilling and in electric cars.

In December, the Arkansas Research Alliance announced that Mantooth was one of its five inaugural fellows. His research team was also recently acknowledged – for the second time in the last five years – with an R&D 100 Award for an electronic charger designed for Toyota’s plug-in electric vehicles.

Mantooth is a fellow of the Institute of Electrical and Electronics Engineers (IEEE), the largest professional society in the world.

Previous SEC Faculty Achievement winners at the University Arkansas are Elliott West (2012), Distinguished Professor of history in the J. William Fulbright College of Arts and Sciences; Greg Salamo (2013), Distinguished Professor of physics, also in the Fulbright College; and Carol Reeves (2014), associate vice provost for entrepreneurship and the Cecil & Gwendolyn Cupp Applied Professor in Entrepreneurship in the Sam M. Walton College of Business.

About the Awards: The SEC Faculty Achievement and SEC Professor of the Year Awards were created in 2012 to honor and celebrate university faculty achievements and contributions in scholarship, research and service. Selected by a committee of SEC provosts, the SEC Faculty Achievement Awards and the SEC Professor of the Year Award are part of SECU, the academic initiative of the conference, which sponsors, supports and promotes collaborative higher education programs and activities involving administrators, faculty and students at its 14 member universities.