Sharon Gaber Appointed as Next President of University of Toledo 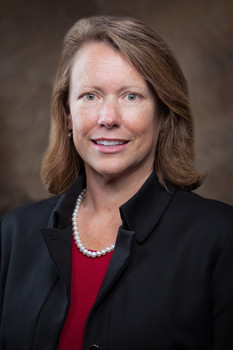 FAYETTEVILLE, Ark. – Provost and Vice Chancellor for Academic Affairs Sharon L. Gaber will leave her post at the University of Arkansas at the end of this academic year to become the next president of the University of Toledo.

“This is a fantastic opportunity for Sharon, and testament to the wonderful work she’s done as provost at the University of Arkansas, especially the blueprint she’s created for becoming a top 50 university,” said Chancellor G. David Gearhart. “While her departure is a tremendous loss for our students and faculty, it’s impossible not to wish her well as she pursues her dream of leading a major university. She’s earned this opportunity, and I’m sure she’ll do an outstanding job.”

Gaber has served as the university’s chief academic officer during a time of unprecedented growth. From 2008-2014, student enrollment grew by nearly 40 percent, while the quality of students also increased. The university added approximately 300 tenure track faculty, increased research funding, and improved graduation rates.

The provost serves as second to the chancellor of the university and serves on the chancellor’s executive committee. As chief academic officer, Provost Gaber hired 11 deans and four vice provosts, and enhanced the diversity among the deans, faculty and students.

“We will be sorry to see her go, she’s done a great job as provost, and it’s no surprise that Toledo wants her,” said John Rupe, chair of the faculty senate and professor of plant pathology in Dale Bumpers College of Agricultural, Food and Life Sciences. “I’ve really enjoyed working with her as Campus Faculty chair and chair of Faculty Senate. We appreciate both her and the chancellor taking the faculty seriously, we have appreciated having a voice with the administration because of her, and wish her the best of luck.”

“The provost’s professionalism and breadth of ability has made it easy for the faculty leadership to tackle our growing university’s needs,” said Neil Allison, chair of the U of A Campus Faculty and associate professor of chemistry and biochemistry. “She will be missed.”

The student newspaper at University of Toledo, The Independent Collegian, gave its endorsement of Gaber over the other two finalists for president, observing “she is very involved in campus life at her current school and is student-centered.”

“Provost Gaber is an avid supporter of student success, and she has been a critical component in the success of many initiatives that the Associated Student Government has pursued to benefit students,” said Daniel McFarland, president of the Associated Student Government. “Under her leadership, alongside the chancellor, she has achieved a plethora of achievements that have put the University of Arkansas on the right track to becoming a top 50 public research institution.

“Provost Gaber, we thank you for your overwhelming support and dedication to the students of this university, and wish you nothing but the best in your future endeavors,” McFarland added.

“This is certainly a bittersweet moment for me,” said Gaber. “We’ve made great progress at the University of Arkansas over the past several years and I have such respect and admiration for this place and especially for the students, deans, faculty, vice provosts and all the staff who are working so hard day in and day out to advance this institution. I’d especially like to thank Dave Gearhart for putting his faith in me and setting the example for collaborative leadership that I have tried to model.

“While similarly sized to us, the University of Toledo is home to a medical school and teaching hospital, which represents an exciting new opportunity for me. There comes a time in every provost’s career when one hopes there’s a chance to take that next step into the presidency. And for me, this is that time,” she said.

Plans for appointing an interim provost will be announced at a later date.