Symposium to Address Protection of Cultural Sites in Middle East 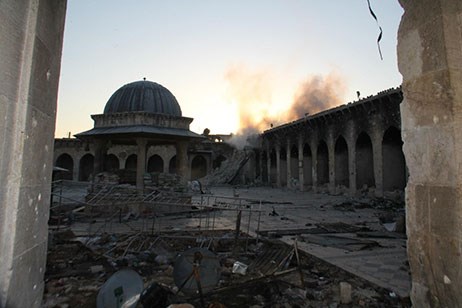 The ancient minaret at the Umayyad Mosque in Syria was destroyed in April 2013.

FAYETTEVILLE, Ark. – A group of internationally known experts will gather at the University of Arkansas this week to discuss the archaeological crisis in the Middle East.

The focus of the symposium, titled “Attempting to Protect Cultural Heritage in the Middle East,” will be on the threats posed to historical treasures by warfare and political unrest, said Jesse Casana, an associate professor of anthropology at the University of Arkansas.

The symposium, which is free and open to the public, is scheduled to begin at 7 p.m. on Thursday, March 5, in Auditorium 218 in Willard J. Walker Hall with a keynote lecture by McGuire Gibson, professor of Mesopotamian archaeology at the University of Chicago.

The conference will continue on Friday with sessions from 9 a.m. to 5:30 p.m. in Willard J. Walker Hall in the Wal-Mart Executive Boardroom, Room 504. Casana will join speakers representing institutions that include the University of Chicago, Boston University, Harvard University and Oberlin College and others.

The event is sponsored by the King Fahd Center for Middle East Studies in the J. William Fulbright College of Arts and Sciences at the U of A.

“This is a group of very influential people who are key players in the countries where they work,” said Casana, an associate professor of anthropology in Fulbright College. “I am curious to hear from all of them because I know about their academic work, but we don’t often discuss more pragmatic issues of cultural heritage directly, so I think the meeting about will be useful for everybody. This is about politics and war as much as it is about archaeology.”

In 2005, Casana began directing a field project at Tell Qarqur, a significant site in the Orentes River Valley of western Syria. He had to stop work on the project in 2011 after protests against the Syrian government escalated into a civil war that continues to the present day. He wasn’t alone. Archaeologists have been forced to abandon their excavations in the Middle East due to the war in Syria and political unrest in Iraq and Iran.

For the past nine months, Casana has played a key role in a project called the ASOR Syrian Heritage Initiative. Beginning Aug. 4, 2014, the American Schools of Oriental Research entered into a cooperative agreement with the U.S. Department of State to document, monitor and report on cultural heritage damage in Syria.

The leaders of the initiative have assembled a team of scholars with professional connections to leading academic and cultural institutions in Syria, the United States, Canada, England, France, Germany, Lebanon and Jordan. Groups of concerned citizens in Syria have been taking action, and the international team has formed alliances and partnerships with these groups.

Casana serves as director for site databases and remote sensing for the initiative, as well as chair of the American Schools of Oriental Research’s Damascus Committee. He is a specialist in the settlement and environmental histories of the region as well as in archaeological remote sensing.

Casana has access to thousands of satellite images of archaeological sites in Syria, Iraq and Turkey through the cooperative agreement with the State Department. The American Schools of Oriental Research awarded Casana a $52,942 grant to develop a site database and monitor damage to sites through imagery analysis.

Last year, Casana directed a pilot project using 25 donated satellite images of archaeological sites and authored a paper on the subject in the Journal of Eastern Mediterranean Archaeology and Heritage Studies.

“The war in Syria and the rise of the Islamic State extremist group have profoundly affected the direction of research, as well as the survivability of ancient and historic sites, objects, institutions and people that go along with them,” Casana said. “There’s often a lot of questions about why we should care about the destruction and theft of antiquities when thousands of people are getting killed. I personally look at it as one small component of a humanitarian disaster.”

About the J. William Fulbright College of Arts and Sciences: Fulbright College is the largest and most academically diverse unit on campus with 19 departments and 43 academic programs and research centers. The college provides the core curriculum for all  University of Arkansas students and is named for J. William Fulbright, former university president and longtime U.S. senator.